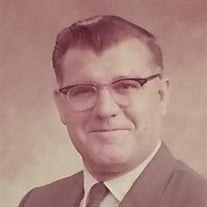 Woodrow Wilson White, former long term resident of Oxford, CT, died peacefully on September 26th at the age of 96 at the Colonial Poplin Nursing Home (Fremont, NH). Wilson – along with his twin brother Warren Harding White – was born February 5, 1921 in Weston, West Virginia to Oliver Paxton and Delphia Mae (Douglass) White. They were the youngest of 8 children. He graduated from Charleston, WV High School and earned a BS degree (Cum Laude) in Chemistry from Morris Harvey College in Charleston, WV. He married Mary Julia Kincaid on May 12, 1945 at Bream Memorial Presbyterian Church in Charleston, WV. She predeceased him on December 24, 2011 at the age of 88 – after 66 years of marriage. His 42 year career as a research chemist began in the Synthetic Rubber plant in Institute, WV during WW ll and required moves to Texas, Connecticut, Louisiana and Ohio. He is the author of multiple papers and patents in the field of Polymers and Colloid chemistry. He and Mary Julia resided in Oxford, CT for more than 30 years, where they raised their four children. He was active in the community and church, serving in various positions and activities, including six years as Second Selectman. His oldest son, David Wilson White – a retired PhD chemist in Clintonville, WI – predeceased him by five weeks on August 22. The surviving children are: Mary Jeanne Brown, retired RN of Marengo, IL ; Wayne Douglas White, practicing MD of Kennebunk, ME and Warren Franklin White, Program Manager at the Superior Group of Conifer, CO. In addition, there are seven grandchildren and three great grandchildren. A Celebration of Life Service in memory of Wilson will be held at the Oxford United Church of Christ Congregational, 3 Academy Rd, Oxford, CT on Thursday October 5 at 12 noon with Pastor Donna Cassity, officiating. Interment in the family plot will follow at the Oxford United Church of Christ Congregational Cemetery, Oxford.The family invite all to the Parish Hall after the cemetery for a reception. There will be no calling hours. The Miller-Ward Funeral Home of Seymour is compassionately caring for the family. To light a virtual candle and leave online condolences please visit 8www.millerwardfuneralhome.com

The family of Woodrow Wilson White created this Life Tributes page to make it easy to share your memories.

Send flowers to the White family.