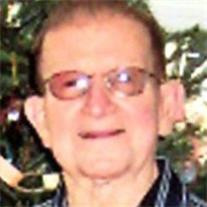 Victor John Voronko, age 84, of Seymour, the beloved husband of Florence Powichrowski Voronko, entered into eternal rest on Friday, March 30, 2012 at Griffin Hospital, Derby, surrounded by his loving family. He was born in Throop, PA on April 7, 1927, son of the late Joseph and Mary Ezepchick Voronko. Victor was a devout communicant of St. Augustine Church of Seymour. He was a retired Foreman in the Laminating Department of Sikorsky's Bridgeport plant. Victor was a United States Navy Veteran of World War II serving with the rank of Seaman First Class and was awarded the American Theater Ribbon and the Victory Medal. He moved from Pennsylvania to Seymour in 1966. Victor was an avid golfer, a Boston Red Sox fan and a UCONN Men's and Women's Basketball fan. He will be sadly missed by his family and many friends. Victor's loving family in addition to his wife Florence includes his caring son Paul J. Voronko and his wife Cheryl J. of West Chester, PA, his devoted sister Agnes Powichrowski of Stratford, a cherished granddaughter Taya P. Voronko of West Chester, PA and several loving nieces and nephews. He was predeceased by his sister Lena Perko and his five brothers Michael, Benjamin, Nicholas, Walter and Joseph Voronko. A Funeral Service in Celebration of Victor's Life will be offered on Wednesday, April 4, 2012 at 9:00 am in the Chapel of the Miller-Ward Funeral Home, 260 Bank St (RT 67, across from Klarides Village) Seymour with a Mass of Christian Burial to follow at 10:00 am at St. Augustine Church, 35 Washington Ave, Seymour. Interment with Military Honors accorded will be held on Thursday, April 5, 2012 at St. Mary Chapel Mausoleum, Dickson City, PA. Friends and relatives may call at the funeral home on Tuesday, April 3, 2012 from 4:00 pm to 7:00 pm. In lieu of flowers, memorial gifts in memory of Victor may be made to The Seymour Ambulance Fund, 4 Wakeley Street, Seymour, CT 06483 or to St. Augustine Church, 35 Washington Ave, Seymour, CT 06483.

The family of Victor Voronko created this Life Tributes page to make it easy to share your memories.

Send flowers to the Voronko family.