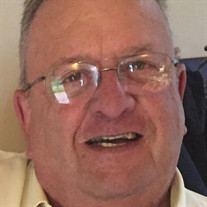 On Saturday, March 5, 2022, Thomas King, loving husband, father and grandfather, passed away at the age of 80. Tom was born on December 22, 1941, in Holyoke, MA to Leo and Annette (Langlois) King. In 1963 he married his high school sweetheart, Cynthia Jacyszn, and not long after they welcomed two daughters and in 1971 settled down in Wilton, CT. Tom had many passions in life and made two of them into a career. The restaurant business was in his blood. For almost two decades, Tom worked for Friendly's Ice Cream. After finishing their management training program, he became the first manager of the Friendly’s in Wilton in 1969 and moved his way up to District Manager. In the 1980s, he turned his life-long love of movies into a successful video business, KC Video, opening five stores around Westchester and Fairfield County. And then in 1991, Tom and his daughter Marcia, opened their own restaurant, The Olde Schoolhouse Grill in Cannondale Village in Wilton, CT, which became a favorite spot for locals to enjoy good food and a quaint atmosphere on the banks of the Norwalk River. His hard work paid off as he ended his career at The Olde Schoolhouse Grill in 2007. After retirement, he and Cynthia moved to Chatfield Farms in Beacon Falls, CT and enjoyed many years of traveling the world, playing golf and being with their grandkids, Jess and Nick. Tom was also very involved with his friends there, organizing movie nights, calling Bingo, "cleaning house" at poker (sometimes), and manning the grill at community gatherings. Tom was preceded in death by his father and mother as well as his brother, Roger. He is survived by his wife Cynthia, his two children, Marcia Chaloux of Newtown, CT, and Beth Dauscher of Stratford, CT and his two grandchildren, Jess and Nick Chaloux. A Mass of Christian Burial will be held on Saturday, March 12, 2022, at St. Michael’s Roman Catholic Church, 25 Maple Avenue in Beacon Falls, CT at 10am. The family is asking that in lieu of flowers that you consider making a contribution to your favorite charity in Tom’s honor.

On Saturday, March 5, 2022, Thomas King, loving husband, father and grandfather, passed away at the age of 80. Tom was born on December 22, 1941, in Holyoke, MA to Leo and Annette (Langlois) King. In 1963 he married his high school sweetheart,... View Obituary & Service Information

The family of Thomas King created this Life Tributes page to make it easy to share your memories.

Send flowers to the King family.