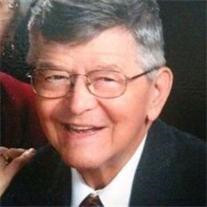 Steven Csuka passed away on Friday, June 22, 2012 at St. Mary's Hospital VITAS Hospice Facility after a long term illness. He was happily married to Claudia (Hicks) Csuka for 49 years. He lived a life full of music, travel, and family. Steve was born in Bridgeport, Connecticut on October 20, 1940, the son of Stephen and Margaret (Nagy) Csuka. Steve was recognized for his music ability at an early age and was picked to be Tom Thumb on the GE float in 1949. Steve graduated from Danbury State College with a Bachelor of Science in Music. He then received his Masters of Science in Music at Western Connecticut State University. He completed his 6th year in Administration at The University of Bridgeport. Steve was employed at Seymour Board of Education for 35 years. He retired in 1997 as the Music Director at Seymour High School. He touched many students' lives through his love for music. Steve was a member of The Waterbury Chorale and The Naugatuck Community Chorus. Through his interest in the Waterbury Chorale, Steve and his wife Claudia traveled throughout the world. He was also a former member of the Beacon Falls Lions Club. Steve was a longtime communicant at Saint Michael's Catholic Church in Beacon Falls where he was an organist for over 25 years. He was a former member of the church's Men's Club. Greater than his love of music, was Steve's love for family. In addition to his loving wife, Claudia, Steve is survived by his four children: Regina (Csuka) Evans and her husband Doug of Downington, Pennsylvania; Margaret (Csuka) Picard and her husband Ron of Southington, Connecticut; Stephen Csuka and his wife Trish of Cumming, Georgia; Brian Csuka and his wife Jenn of Southington, Connecticut; his brother Allan Csuka and his wife Donna from East Haven Connecticut; and Steve's eleven grandchildren; Carlyn Evans, Rachel Evans, Emily Csuka, Delaney Picard, Aiden Csuka, Sarah Csuka, Haley Picard, Ella Csuka, Elyse Picard, Erin Picard and Kyra Csuka. Steve is predeceased by his parents, his sister Carolyn (Csuka) Tracy and his grandson, Cameron Evans. The family would like to say a special thank you to the many loving and compassionate care givers that cared for Steve over the last few years. A Funeral Mass in Celebration of Steve's life will take place at St. Michael Catholic Church, 25 Maple Ave, Beacon Falls on Tuesday, June 26th at 11:00 am. Friends and family may call at the church from 9:30-10:30am. Interment will be at the convenience of the family. Memorial Contributions in Memory of Steve may be made to The St. Michael Church Renovation Fund, 25 Maple Avenue, Beacon Falls, CT 06403.

The family of Steven Csuka created this Life Tributes page to make it easy to share your memories.

Send flowers to the Csuka family.