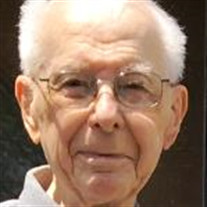 Stephen Joseph Pavlo, 96, of Trumbull, passed away peacefully at home on March 1st with his loving family by his side. He was predeceased by his parents, John Pavlo and Elizabeth (Levkus) Pavlo, and sisters, Rita Kalinowski and Evelyn Denisevich. Stephen attended Harding High School and continued his education at the University of Connecticut to study Engineering. From 1942-1943 he worked at Vaught-Sikorsky Aircraft Corporation, Stratford CT, as an Engineering Draftsman designing the first Sikorsky helicopter, the VS-300. Between 1943-1946 Stephen proudly served his country in the midst of WWII by joining the United States Navy, where he was stationed on an Edsall-Class Destroyer Escort, the USS Haverfield, DE-393, as a Chief Motor Machinist’s Mate. He served in both the Atlantic and Pacific theaters. He received an honorable discharge and was the recipient of two Presidential Unit Citations, the American Theater Medal, Asiatic-Pacific Medal, Victory Medal, European Theater Medal, Commendation Ribbon, and the Philippine Liberation Medal. Stephen worked as a Cost Estimation Engineer for over 30 years at Trio Industries, Bridgeport, CT, an architectural metal window, door, and panel fabricator, responsible for a large number of skyscraper building construction projects in major US cities. He then worked at LFE Fluid Controls Division, Hamden, CT for many years as a Cost Estimation Engineer. Stephen was an active member of Saint Theresa’s Church, Trumbull, CT for over sixty years, and had been a past president of the Holy Name Society. He enjoyed bowling with the St. Teresa Men’s League well into his early nineties. Home and car repair projects were Stephen’s passion, and when Stephen was not at home fixing something or another, he was quick to be at the home of one his children, relatives, and neighbors in need, offering his time, sage technical wisdom, and lending a hand on never-ending projects and problems of others. His technical expertise proved invaluable countless times, and his signature tag line was always, “If I Can’t Fix It, It’s Junk.” Stephen enjoyed working on his prized 1956 Packard automobile, polka dancing, cooking hot, spicy foods, and playing music on his accordion and harmonica at family events. He was a very strong family man who loved his wife and children tremendously. Stephen leaves behind his beloved wife of sixty-one years, Mary Louise (Drobne) Pavlo, and his children, Christine Babina (David) of Oxford, Connecticut; John Pavlo (Stephanie) of Oxford, Connecticut; Stephanie Dancsak (David) of The Woodlands, Texas; and Robert Pavlo (Rachel Harrington-Pavlo) of Milford, Connecticut. In addition, he leaves behind his loving granddaughters Arianne Babina (Adam Kirsch) of Uppsala, Sweden; Melissa Babina (Jacob Drozd) of El Paso, Texas; Samantha Pavlo of Oxford, Connecticut, and great granddaughter, Ava Hayden of Milford, Connecticut; also, grandsons, Gregory Babina of Milford, Connecticut and Benjamin Pavlo of Oxford, Connecticut, and his constant companion and loyal cat, Dobie. A Mass of Christian Burial in Celebration of Stephen's Life will be held on Friday, March 6, 2020 at 10:30 am at St. Theresa Church, 5301 Main St, Trumbull, CT. Interment with Military Honors will follow in the family plot at St. John Cemetery, Monroe, CT . Friends and relatives may call at the Miller-Ward Funeral Home, 260 Bank Street, (RT 67, across from Klarides Village) Seymour on Thursday, March 5, 2020 from 5:00 pm until 7:00 pm. In lieu of flowers, memorial gifts in Stephen's memory may be made to the National Kidney Foundation through the funeral home. To leave online condolences or to light a virtual candle, please visit www.millerwardfuneralhome.com

Stephen Joseph Pavlo, 96, of Trumbull, passed away peacefully at home on March 1st with his loving family by his side. He was predeceased by his parents, John Pavlo and Elizabeth (Levkus) Pavlo, and sisters, Rita Kalinowski and Evelyn Denisevich. Stephen... View Obituary & Service Information

The family of Stephen Joseph Pavlo created this Life Tributes page to make it easy to share your memories.

Send flowers to the Pavlo family.