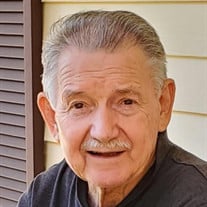 Ronald Robert Krymowski, age 85, of Beacon Falls, the beloved husband of 65 years to Josephine Volch Krymowski, entered into eternal rest peacefully on Thursday, February 24, 2022 with his family by his side. He was born in Duryea, PA on October 29, 1936, loving son of the late John and Nellie Janicki Krymowski. Ron was a devout communicant of St. Michael Church in Beacon Falls, who proudly served his country in the United States Army, 82nd & 11th Airborne as a Sergeant stationed in Augsburg, Germany. During high school he played football and worked at Rocky Glen Park in Moosic, Pennsylvania where he met the love of his life Josephine and they were married at Fort Bragg in 1957. Ron retired after 38 years from Sikorsky Aircraft as a Foreman and then went on to work for Stop and Shop for 17 more years, retiring in 2018. Ron was an avid fan of the Philadelphia Eagles. Most of all, he loved to spend time with his family and many friends. Ron will be sadly missed by all but will remain forever in our hearts. His loving family in addition to his wife Josephine includes his caring daughters Karen Staley and her husband Richard, Sr. of Deering, NH and Denise Matthews and her husband Scott of Oxford, his cherished grandchildren Jeffrey Jones of Oxford, Angela Andrews of Loudon, NH and Thomas Jones of Woodbury, his two cherished great-grandchildren Searra and Ellie Andrews of Loudon, NH and several loving nieces and nephews. Ron was predeceased by his beloved grandson Richard Staley, Jr., his two brothers John and Frank Krymowski and his two sisters Josephine Krymowski and Theresa Thiede. A Mass of Christian Burial in Celebration of Ron’s life will be held on Saturday, March 5, 2022 at 11 am DIRECTLY at St. Michael Roman Catholic Church, 25 Maple Ave, Beacon Falls. Interment, with full military honors accorded will follow in the family plot at Mountain Meadows Cemetery in Seymour. Friends and relatives may call on the family on Friday, March 4, 2022 from 4:00 pm until 7:00 pm at the Miller-Ward Funeral Home, 260 Bank St (RT. 67, across from Klarides Village) in Seymour. In lieu of flowers, memorial gifts in Ron’s memory may be made to the Beacon Hose Co. No. 1 Ambulance Service through the funeral home.

Ronald Robert Krymowski, age 85, of Beacon Falls, the beloved husband of 65 years to Josephine Volch Krymowski, entered into eternal rest peacefully on Thursday, February 24, 2022 with his family by his side. He was born in Duryea, PA on October... View Obituary & Service Information

The family of Ronald Robert Krymowski created this Life Tributes page to make it easy to share your memories.

Send flowers to the Krymowski family.