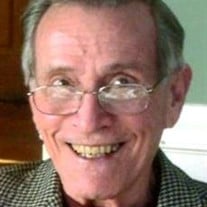 Robert L. " Bobby" Fritz, Sr., died peacefully at home on November 1, 2018 at the of age 86. He was born in Waterbury Hospital on November 29, 1931. He was a graduate of Seymour High School and was the Class President, Class of 1949. He was a member of the 1st Seymour High School Football Team. He served his country with pride and honor in the U.S. Navy and was a chef on the USS Becuna during the Korean War. In 1954 he opened Fritz's Snack Bar in Oxford, CT that his sons still run today. Some of Bobby's favorite activities were fishing, hunting and clamming in Rhode Island. Bobby was an avid Red Sox Fan. He always played an active role in his children's lives including attending activities and as well as coaching Little League and Pop Warner Football. He was a member and Past Commander of the David S. Miles Post, American Legion of Oxford, as well as a member of Port 5 of Bridgeport and was honored by them for his US Navy service to our nation. Bobby will be sadly missed by all and will remain forever in our hearts. His loving family includes his wife Mary Mastrobattisto Fritz of Oxford, daughters Mandy Hicks (Victor) of Seymour, Lorie Robinson of Southbury, sons Bobby Fritz of Naugatuck, Glenn Fritz(Emily) of Southbury, sister Marian Kalpin of Watertown . He adored his grandchildren Jessica and Carissa Geloso, Tyler, Brittany and Kayce Hicks, Brady and Nina Fritz and Danielle Robinson, along with his great granddaughters Anna Lisa and Arianna and many nieces and nephews. He was predeceased by his parents John and Minnie Natusch Fritz, his daughter Lisa Fritz, his first wife Eleanor Rizzo Fritz and brothers John and Bill Fritz. A Funeral Service in Celebration of Bobby's Life will be held on Monday, November 5, 2018 at 10:00 am at The Seymour Congregational Church, 15 Broad St., Seymour. Interment with Military Honors will follow in the family plot at Southford Cemetery, Oxford. Friends and relatives may call on Sunday, November 4, 2018 from 4:00 to 8:00 pm at The Seymour Congregational Church, 15 Broad St., Seymour. In lieu of flowers, memorial contributions may be made to the Michael J. Fox For Parkinson Research or Seymour Pink, through the funeral home.

The family of Robert L. Fritz Sr. created this Life Tributes page to make it easy to share your memories.

Send flowers to the Fritz family.