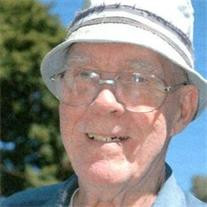 Richard Hall Miles, 84, of Seymour, beloved husband of 55 years to Joanne Barclay Miles, entered into rest on February 5, 2012. He was born in Montpelier, VT on March 1, 1927, son of the late Carroll and Grace Bugbee Hall Miles. He was a devout communicant of the Trinity Episcopal Church of Seymour. Richard was a self taught Sign Painter. He was employed by the United Outdoor Advertising Company in New Haven. His main job there was to letter the bulletins and billboards along I95. In 1971, Richard started the R. Miles Signs Company which he operated for 30 years. One of his many customers was the George J. Hummel Little League which he supported. He enjoyed cross-word and jigsaw puzzles, horseshoes, fishing, gardening, playing cards and cooking, especially his recipes for cole slaw and barbeque chicken. In 1944, Richard joined the U.S. Navy and served in the South Pacific during WWII on the USS Attala. He was an avid fan of the Boston Red Sox, New England Patriots and the UCONN Huskies. Richard is very proud of his children and their successes in life. He will be sadly missed by his family and friends. His loving family, in addition to his beloved wife, Joanne, includes his sons, Michael R. Benner of Madison, ME, Jay R. Benner (Denise) of Greenville, SC, Mitchell C. Miles of Bethlehem, CT and Richard Barclay Miles (Donna) of Rochester, NH; daughters the Rev. Pattiann Bennett (Bruce) of Eureka, MT and Paula Lenkeit of Milford, CT; a brother Robert Ted Johnson of Northfield, VT; eight cherished grandchildren and seven cherished great grandchildren. A Funeral Services in Celebration of Richard's life will be held on Wednesday, February 15, 2012 at 11:00 am at the Trinity Episcopal Church, 91 Church St, Seymour with the Rev. Kristina Lewis, Pastor, officiating. Full military honors will be accorded. Interment will be at the convenience of the family. In lieu of flowers, memorial gifts may be made to the Alzheimer's Association CT Chapter, 2075 Silas Deane Hwy, Suite 100, Rocky Hill, CT 06067 or the Trinity Episcopal Church Prayer Shawl Ministry, 91 Church St, Seymour, CT 06483 or The Emil Senger Post #10 American Legion, 37 Bank Street Seymour, CT 06483.

Richard Hall Miles, 84, of Seymour, beloved husband of 55 years to Joanne Barclay Miles, entered into rest on February 5, 2012. He was born in Montpelier, VT on March 1, 1927, son of the late Carroll and Grace Bugbee Hall Miles. He was a devout... View Obituary & Service Information

The family of Richard Miles created this Life Tributes page to make it easy to share your memories.

Send flowers to the Miles family.