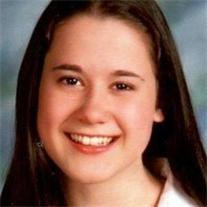 Rebecca (Becky) Rachel Karlak, beloved daughter of Michael and Martha Arey Karlak, the youngest of five children, died on Thursday, October 31, 2013 due to a car accident. Rebecca was born on February 3, 1988 at Griffin Hospital in Derby, Connecticut. She went to Seymour public schools and graduated from Seymour High School in 2006. Rebecca attended Naugatuck Valley Community College and obtained her Associate Degree in 2010. She was currently attending The Connecticut Center of Massage Therapy in Westport and was due to graduate in December 2013. Rebecca was employed at Employment Options, LLC of Oxford, helping the severely disabled with acquired brain injuries and was also employed at Hawley Lane Shoes in Orange. In her life, Rebecca was a born again Christian who enjoyed telling others about Jesus. Rebecca went on a mission trip to Thailand in 2010-2011 with Youth With a Mission (YWAM). She had a very friendly, outgoing, and helpful personality. Rebecca was always happy to be around people and wanted to travel. She will be remembered for her bubbly personality and smiling face. Rebecca was currently attending Huntington Chapel in Shelton and grew up attending Pinebrook Assembly of God in Naugatuck. She will be sadly missed by her family and many friends. Rebecca is survived by her parents Michael Karlak and Martha Arey Karlak of Seymour, her grandfather Andrew Karlak of Seymour, her sister Naomi Karlak Bell and her husband Owen Bell and their three children of Terryville, her brother Matthew Karlak and his wife Georgianna and their four children of Plymouth, her brother Aaron Karlak and his wife Sarah and their two children of Beacon Falls and her brother Seth Karlak and his wife Kerstin Salinas of Shelton. She is also survived by her four cousins and her Uncle Fred Oko and Aunt Karen Karlak Oko of Seymour and their grown children and Uncle Bruce Arey and Aunt Debra Arey of North Grafton, MA and their grown children. Rebecca was predeceased by her paternal grandmother Helen Karlak of Seymour and by her maternal grandparents Kenneth and Eleanor Arey of Manchester, CT. A Funeral Service in Celebration of Rebecca's Life will be held on Saturday, November 9, 2013 at 10:00 a.m. DIRECTLY at the Pinebrook Assembly of God, 232 City Hill Street, Naugatuck. Interment, in the family plot will follow. Friends and relatives may call at the Pinebrook Assembly of God on Friday, November 8, 2013 from 4:00 pm to 8:00 pm. Memorial gifts in Rebecca's memory may be made to Youth With a Mission (YWAM) or to Love146 through the funeral home. The Miller-Ward Funeral Home of Seymour is compassionately caring for the family.

The family of Rebecca Karlak created this Life Tributes page to make it easy to share your memories.

Send flowers to the Karlak family.