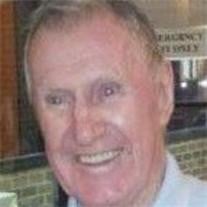 Peter Patrick Clark Jr., age 90, of Seymour, beloved husband of Harriet Leahy Clark, entered into eternal rest on Monday, December 10, 2012 . He was born in Glasgow, Scotland on April 5, 1922, the son of the late Peter P. Clark Sr. and Elizabeth Caron Clark. Peter was communicant of the Church of the Good Shepherd, Seymour and served on its bingo committee for many years. He graduated from Seymour High School Class of 1941. He was the founding member of the Ansonia Little League in 1952 with his lifelong friend Albert Tong. He loved being with his family and friends. Peter retired from the State of Connecticut where he had been a Judicial Marshal for the New Haven, Milford and Derby Courts. previous to his employment with the State of Connecticut he retired from the Uniroyal Corp. of Naugatuck. He was a member of the Democratic Town Committee and was a member of the Fountain Hose Co. of Ansonia. He was a volunteer for the Vanguard Drum and Bugle Corps. For many years he worked for Seccombe Monument Company. He will sadly be missed by his family and friends. In addition to his wife Harriet his loving family includes devoted son P. Thomas Clark of East Harford,CT., his caring daughter Colleen Tingley of Ansonia, his sisters Mary McLaughlin and Elizabeth McManus , a cherished granddaughter Amanda Tingley of Torrington and several nieces and nephews. His dearest friend John Ring of Prospect and his extended family Lena Sbardelatti, James, Michelle, and Emilia Mead and Thomas, Lisa, Zachary and Tyler Pranger. He was predeceased by his cherished grandson Troy Clark and sister Catherine Conroy. A Mass of Christian Burial will be held on Saturday, December 15 , 2012 at 10:00 am DIRECTLY at the Church of the Good Shepherd, 135 Mountain Rd., Seymour. Interment in the family plot at St. Augustine Cemetery, Seymour will follow. Friends and relatives may call on Friday, December 14 , 2012 from 4:00 pm until 8:00 pm at the Miller-Ward Funeral Home, 260 Bank Street, (Route 67, opposite Klarides Village), Seymour. In lieu of flowers, memorial gifts may be made in Peter's memory to the St. Jude Children's Research Hospital, 501 St. Jude Place, Memphis,TN 38105.

The family of Peter Clark created this Life Tributes page to make it easy to share your memories.

Send flowers to the Clark family.