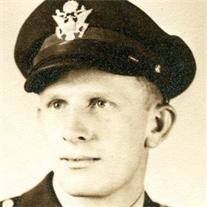 Michael Martin Stelmack, age 89, of Seymour, the devoted husband of Anita Urban Stelmack, entered into rest on Wednesday, February 22, 2012 at home surrounded by his loving family. He was born in Allentown, PA on June 11, 1922, son of the late Eric and Pauline Stelmack. Michael was communicant of Trinity Episcopal Church of Seymour and was a Lab Technician for BF Goodrich of Shelton for many years. He enjoyed gardening, carpentry, traveling and working. Michael proudly served his country as a member of the United States Army Air Corps during World War II as a 1st Lieutenant with the 69th Bomb Squad. He was a Bombardier Navigator who flew 25 missions between 1942-1945. Michael was the recipient of the Asiatic Pacific Theater Ribbon with four Bronze Stars, the Philippians Liberation Ribbon with one Bronze Star, Air Medal with two Oak Leaf Clusters and two Overseas Service Bars. He will be sadly missed by his family and friends. Michael's loving family in addition to his wife Anita includes his beloved sister Mary Icaville of Lodi, NJ, his caring nephew William Urban of Ansonia and a loving niece Lorraine Vincent of Clearwater, FL. He was predeceased by his loving brothers Bohdan and Walter Stelmack and his beloved sisters Olga Mitchell and Mae Korin. A Funeral Service in Celebration of Michael's life will be held on Monday, February 27, 2012 at 11:00 am in the Chapel of the Miller-Ward Funeral Home, 260 Bank St (RT 67, across from Klarides Village) Seymour with the Rev. Dr. Kris Lewis, Rector of Trinity Episcopal Church, officiating. Interment in the family plot at Saint Peter and Saint Paul Cemetery in Derby will follow. Full Military Honors will be accorded at the cemetery by the Emil Senger Post #10 American Legion of Seymour. There will be no visitation. Memorial gifts in memory of Michael may be made to Trinity Episcopal Church Memorial Fund, 91 Church Street, Seymour, CT 06483.

Michael Martin Stelmack, age 89, of Seymour, the devoted husband of Anita Urban Stelmack, entered into rest on Wednesday, February 22, 2012 at home surrounded by his loving family. He was born in Allentown, PA on June 11, 1922, son of the late... View Obituary & Service Information

The family of Michael Stelmack created this Life Tributes page to make it easy to share your memories.

Send flowers to the Stelmack family.