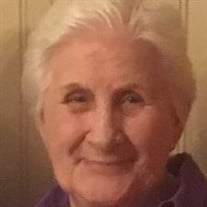 Lillian McLaughlin Dirzius, age 87 , of Seymour, the beloved wife of 60 years of the late Frank Joseph Dirzius, Sr., peacefully entered into eternal rest on Monday, December 5, 2016 at Griffin Hospital, Derby. Mrs. Dirzius was born in Derby, on January 6, 1929, daughter of the late Henry and Mary Davidonas McLaughlin. Lillian was a graduate of Ansonia High School, Class of 1947. She was formerly employed as a supervisor of housekeeping at The Harrison Inn of Southbury. She sang with the Sweet Adeline's Choral group. She also studied opera, she loved music, movies and horseracing. Lillian was a devout communicant of St. Anthony Church of Ansonia for many years. She loved being with her family and friends and especially her cherished grandchildren and great-grandchildren. She will be sadly missed by her family and many friends and will remain forever in their hearts. Lillian is survived by her four devoted sons James (Linda) Dirzius of Southbury, John ( Diane) Dirzius of Wallingford, Dennis (Emma) Dirzius of West Haven and Joseph Dirzius of PA, caring sister Ruth McLaughlin of Southbury, seven loving grandchildren Melissa, Matthew, Jeffrey, Michelle, Gregory Kristen and Theresa, eight cherished great-grandchildren Makayla, Jacob, Tatiana, Benjamin, Noah, Gage, Gavin and Jonathan as well as several nieces and nephews. Lillian was predeceased by her son Frank J. Dirzius, Jr., a brother Henry McLaughlin and a grandson Larry Burhans. A Mass of Christian Burial in Celebration of Lillian's Life will be held on Friday, December 9, 2016 at 11:00 am (Directly) at Augustine Church, 35 Washington Ave, Seymour. Interment will be in the family plot at St. Augustine Cemetery, Seymour. Friends and relatives may call on Thursday, December 8, 2016 at The Miller-Ward Funeral Home, 260 Bank St. (Rt. 67, opposite Klarides Village) Seymour, from 4:00 pm until 7:00 pm. Memorial gifts in Lillian's memory may be made to The Juvenile Diabetes Association, through the funeral home.

The family of Lillian Mae Dirzius created this Life Tributes page to make it easy to share your memories.

Send flowers to the Dirzius family.