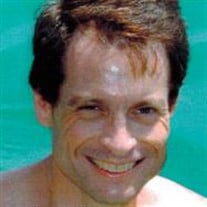 Keith Glassman's life was taken from us suddenly at the age of 58 in a tragic automobile accident in July of 2020 in San Diego, California. Keith was the beloved son of Carol and George Glassman, M.D. of Beacon Falls, CT, the only sibling of Laurie Glassman-Wisnewski, M.D., the brother-in-law of Adam Wisnewski, Ph.D., and the only surviving uncle of Benjamin, Jillianne and Abigail Wisnewski. He also leaves behind his lifelong friends Allison D.B. Liebowitz, Esq., Douglas Willinger, Dong-Phuong Nguyen, L.Ac., (OMD, VN) and her daughters Tam-Nhu and Tam-An Lam both of whom he loved like they were his own. Keith was born in New York, NY in 1962, spent his childhood in New Rochelle, New York, until he graduated with distinction from New Rochelle High School in 1980. Afterwards he pursued his college education at Massachusetts Institute of Technology (M.I.T.), where he eventually decided his true calling lay in the practical application of engineering vs. the theoretical. He finished his B.S. in Aerospace Engineering at Parks College of Engineering & Aviation in Cahokia, IL in 1991, earning his Associates and B.S. Degrees in Aircraft Maintenance along the way, as well as obtaining his License in Airframe and Powerplant Support and became accomplished in the field of Aircraft Structural Dynamics. After moving to California Keith continued his postgraduate education with additional coursework at UC Berkeley. He embarked on his career as an Aerospace Engineer in 1990, serving our government as a civilian engineer for the Navy. Keith has been at the NAVAIR, Fleet Readiness Center Southwest, Naval Air Station North Island in San Diego, CA, where he served as a member of the F/A-18 Structures Fleet Support Team since August 1991. He was a member of the team of scientists and engineers that planned and developed modifications to the F/A-18 airplane and assisted in developing repair procedures. Keith was recognized with several awards; in 2004 with an Achievement Award for a Metal Compound Bonded Repair on a fighter plane, and most recently in 2019 with a Special Act award from the Navy. A true scientist at heart, he has also participated in research in working oxygen fueled ion engines for earth orbit applications. Those fortunate enough to love, know and work with Keith knew him as a most brilliant man and unique soul, a considerate, gentle and kind man with a deep sense of loyalty and honor, a man with strong family values, a strong work ethic, and a firm belief in the importance of education. He was a devout “Trekkie”, enjoyed hiking, model building, and spending time with his family, friends and cats. For almost 30 years Keith has been an avid Volunteer and Member of the American Institute of Aeronautics and Astronautics ("AIAA"). He served as the Chair of the AIAA San Diego Section, and became head of the Honors and Awards committee, organizing the annual awards banquet for the AIAA, as well as the Annual National Engineers’ Week Banquet for the San Diego County Engineering Council. He also enjoyed membership in the U.S. Naval League, the U.S. Naval Institute, and the National Space Society. In Lieu of Flowers, the family has requested that donations be made in Keith’s Honor to the AIAA Foundation (see link below) to help support the type of educational outreach programs in which Keith so strongly believed in and in which he so truly enjoyed participating. https://www.aiaa.org/foundation/how-to-give Due to Covid-19 restrictions a socially distanced Gathering for close friends and family was held August 1, 2020 starting at 9:00 AM, outside in Kearny Mesa Recreation Center Park, 3170 Armstrong St., San Diego, CA.

Keith Glassman's life was taken from us suddenly at the age of 58 in a tragic automobile accident in July of 2020 in San Diego, California. Keith was the beloved son of Carol and George Glassman, M.D. of Beacon Falls, CT, the only sibling... View Obituary & Service Information

The family of Keith Glassman created this Life Tributes page to make it easy to share your memories.

Keith Glassman&#39;s life was taken from us suddenly at the age of...

Send flowers to the Glassman family.