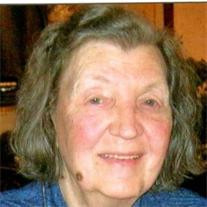 Katherine Eleanor Kinney Fagan, age 81, of Oxford, beloved wife of 61 years to the late Harold "Murph" William Fagan, entered into rest on Sunday, November 11, 2012 at Griffin Hospital, Derby. She was born in Shelton,Ct, on January 5, 1931, the daughter of the late Nelson and Thilda Christiansen Kinney. She was a devout communicant of Christ Church Quaker Farms. She was a graduate of Seymour High School. She was an avid reader and loved to crochet, knit and do needlepoint. She also enjoyed growing her own vegetables and her flower gardens. Her loving family includes her caring daughter Sandra Kummer of Oxford, her loving daughter-in-law Holly Fagan of Naugatuck, her cherished grandchildren Walter Kummer of West Haven, Joseph Kummer of Ansonia, Steven Kummer and his wife Elizabeth of Ansonia, Matthew and Christopher Fagan of Naugatuck, and her cherished great-grandchildren Victoria Kummer, Ashley Kummer, Alivia Kummer and Adam Fagan, several loving nieces and nephews. In addition her husband and parents she was predeceased by her beloved son Mark H . Fagan, and her brothers Charles Nelson Kinney, Charles Kenneth Kinney and Ole Kinney, and her sisters Emma Cetrone, Thilda Benson, Helen Benson and Marion Kinney. Friends and relatives are asked to go Directly to Christ Church Quaker Farms, 470 Quaker Farms Rd., Oxford, for a Requiem Eucharist to be celebrated at 11:00 a.m., on Wednesday November 14, 2012 with Father John Donnelly, Rector, officiating. Interment in the family plot at Brookside Cemetery, Oxford. Friends and relatives may call on Tuesday, November 13, 2012 from 5:00 to 8:00 p.m. at The Miller-Ward Funeral Home, 260 Bank Street, 'Rte 67' Seymour (opposite Klarides Village). In lieu of flowers memorial gifts may be made in Katherine's memory to the Christ Church Quaker Farms Hurricane Relief Fund or to the Quaker Farms Fire Company, Oxford, through the funeral home.

The family of Katherine Eleanor Kinney Fagan created this Life Tributes page to make it easy to share your memories.