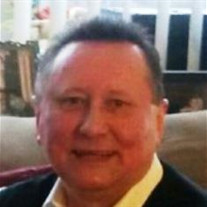 Jozef Dekarz, age 65, of Woodbridge, the beloved husband of 43 years to Helen Kupinski Dekarz, entered into eternal rest peacefully on Friday, June 9, 2017. He was born in Poland on August 23, 1951, son of the late Waclaw and Natalia Klim Dekarz. Jozef grew up in Poland before moving to the United States in 1974. He settled in Woodbridge in 1989. Jozef was the proud owner of Dekarz Engineering of Seymour for close to 35 years. He had a fondness for gardening and landscaping in his yard. Jozef was very active and social, quite often with a big smile on his facing, singing a favorite song. He lived the American Dream, moving here with nothing but made a life for himself and his family that will live on for generations. Jozef will be sadly missed by his family and many friends but will remain forever in our hearts. His loving family in addition to his beloved wife Helen includes his son Andrzej Dekarz and his wife Carolina of Waterbury, his two daughters Elizabeth Dekarz of Derby and Agnieszka Dekarz of Hamden, his grandchildren Nicholas and Marianna, his brother Andrzej Dekarz and his wife Agata, his sister Jadwiga Zabielski and her husband Jan, several nieces and nephews, his brother in law Stan Kupinski and his mother in law Marianna Kupinski A Mass of Christian Burial will be held on Thursday, June 15, 2017 at 10:00 am DIRECTLY at Our Lady of the Assumption Church, 81 Center Road (Rte. 114) Woodbridge. Interment in the family plot at Mt. St. Peter Cemetery in Derby will follow. Friends and relatives may call at the Miller-Ward Funeral Home, 260 Bank Street (RT 67, across from Klarides Village), Seymour on Wednesday, June 14, 2017 from 4:00 pm until 7:00 pm.

Jozef Dekarz, age 65, of Woodbridge, the beloved husband of 43 years to Helen Kupinski Dekarz, entered into eternal rest peacefully on Friday, June 9, 2017. He was born in Poland on August 23, 1951, son of the late Waclaw and Natalia Klim Dekarz.... View Obituary & Service Information

The family of Jozef Dekarz created this Life Tributes page to make it easy to share your memories.

Send flowers to the Dekarz family.