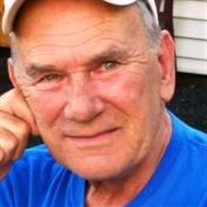 John Matthew "Jack" Karbowicz, age 77, of Oxford, he was the loving companion for many years to Madeline Opper, entered into rest peacefully on Wednesday, January 9, 2019 at Griffin Hospital in Derby. He was born in Waterbury on December 29, 1941, beloved son of the late Matthew and Felicia Mayeran Karbowicz. Jack was a graduate of Naugatuck High School and proudly served his country in the United States Army as a member of Co. "C", 382nd MP BN. He was a self-employed General Contractor/Home Builder for many years who also was a Limo Driver for Hoyt's Livery Service. Jack enjoyed spending time and playing cards with his Card Club, going to classic car shows and watching UCONN basketball. He loved the casino, watching Jeopardy and doing crossword puzzles. Most of all, he loved spending time with his family and many friends. Jack will be sadly missed by all, but will remain forever in our hearts. His loving family includes his daughter Lynn Corcoran and her husband Kevin, his sons David Opper and his wife Barbara and Darren Opper and his wife Elizabeth, his grandchildren Ray, Abby, Kevin, Ryan, Austin, Shane, Kylee, Jayden, David and Devin, his great grandchildren Miles and Chance and several nieces and nephews. Jack was predeceased by his daughter Cheryl Hassenfiedlt, his son John Matthew Karbowicz, Jr., his first wife Jeanne Karbowicz, his sister Carolyn and his brother Robert. A Memorial Service in Celebration of Jack’s Life will be held on Tuesday, January 15, 2019 at 12 noon at the Miller-Ward Funeral Home, 260 Bank Street (RT. 67, across from Klarides Village) Seymour. Friends and relatives may visit with the family prior to the service starting at 11:00 am. All of services are private and at the convenience of the family. Memorial contributions in memory of Jack may be made to The ALS Association or to the Spooner House, both through the funeral home.

John Matthew "Jack" Karbowicz, age 77, of Oxford, he was the loving companion for many years to Madeline Opper, entered into rest peacefully on Wednesday, January 9, 2019 at Griffin Hospital in Derby. He was born in Waterbury on December 29,... View Obituary & Service Information

The family of John "Jack" Karbowicz created this Life Tributes page to make it easy to share your memories.

Send flowers to the Karbowicz family.