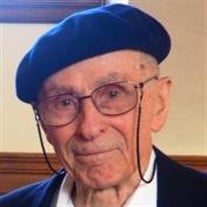 John Russell Boyce, 95, passed away on April 26, 2020, at his home in Bethany after a long illness. John was born on January 16, 1925, in Jefferson City, MO, to Frank and Mabel Caubarrus Boyce. His father, a railroad engineer, inspired an early love for craftsmanship, travel, and adventure. He enlisted immediately after his high school graduation in 1943, and chose to join the Army Air Corps because, as he later recalled, flying sounded like the most fun. He served in the 4th Air Repair Squadron in the Pacific theater until late 1944 and his time in the service instilled in him a love of flying that defined the rest of his life. After the war, he attended college on the GI Bill at Western Reserve (now Case Western Reserve University), in Cleveland, OH, where he majored in French and met the love of his life, Lisabeth “Betty" Gierling. They were married in July 1950, and a year later John joined Trans World Airlines as a pilot. His 34-year career at TWA took him all over the world, first in propeller-driven Constellations and later in jet engine 707s and 747s. He lived a truly cosmopolitan life; he was as likely to have a close friend in Tel Aviv as in Bethany, as likely to leave his wallet in a restaurant in Paris as in Teddy B’s on Amity Road. During his down time, he took up recreational flying whenever and wherever possible. In 1964 he joined the Nutmeg Soaring Association, a glider club that flew out of the Bethany Airport (now based in Freehold, NY), where he flew his own gliders, volunteered as a tow pilot, and served as an instructor for many, many years, and where he taught his children, and his grandchildren, to fly. John was a master woodworker, a polyglot, a gardener, an avid reader of poetry, and a lover of classical music. He believed in the marriage of beauty and functionality, and the precision of his work can be seen in the many things he built over the years — a plane, a harpsichord, a dock at Peck Pond. John was above all a craftsman who loved beautiful things, and he found the most beauty in the things most finely wrought, most cleverly constructed — a turn of phrase in Dickens, a deceptively airy harmony in Bach, the knife-point turn of a glider in the air, a perfectly fitted dovetail joint. He left the world a more beautiful place than he found it. John is survived by his loving wife Betty; his children John, Sara (Lisa), and Anne Marie; and his grandchildren Katherine, Christina, Elisabeth, and Lisabeth. The family would like to thank Opal Stork Home Care, and in particular Lyn Farquharson for her devoted care. In lieu of flowers, donations can be mailed to the Clark Memorial Library, 538 Amity Road, Bethany, CT 06525 or online at http://www.thegreatgive.org/organizations/bethany-library-association or to the Connecticut Food Bank.

John Russell Boyce, 95, passed away on April 26, 2020, at his home in Bethany after a long illness. John was born on January 16, 1925, in Jefferson City, MO, to Frank and Mabel Caubarrus Boyce. His father, a railroad engineer, inspired an early... View Obituary & Service Information

The family of John Russell Boyce created this Life Tributes page to make it easy to share your memories.

Send flowers to the Boyce family.