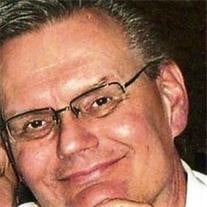 John Bonk, age 59, of Oxford, the beloved husband of 30 years to Suzanne Alberta Bonk, entered into eternal rest on Sunday, April 1, 2012 at Griffin Hospital, Derby. He was born in Chicago on March 20, 1953, beloved son of Constance Balczeniak Bonk of Chicago and the late Eugene Bonk. John was a resident of Oxford for 29 years, previously residing in Chicago. He was an IT Technician with the EACM Advisors of Norwalk for 9 years. John proudly served his country in the United States Army with a rank of Private First Class. He was an avid motorcyclist and enjoyed racing motorcycles, reading and he especially loved spending time with his family and many friends. His loving family in addition to his wife Suzanne includes his brother Leonard Bonk (Jen) of Crest Hill, IL, his two sisters Ann Marie Bonk of Palatine, IL and Leona Zabaidi of Montgomery, IL, his cherished sister in law Michele DiScala of Norwalk, his sister in law Sandra Baczek (Stan) of Deerfield Beach, FL, his brother in law Michael Alberta (Lorrie) of Derby, his five nephews and three nieces. A Funeral Service in Celebration of John's life will be held on Thursday, April 5, 2012 at 7:00 pm in the Chapel of the Miller-Ward Funeral Home, 260 Bank St (RT 67, across from Klarides Village) Seymour with the Rev. Russell Lesiw, officiating. Interment will be private and at the convenience of the family. Friends and relatives may call at the funeral home on Thursday afternoon from 4:00 pm until the start of the service at 7:00 pm. In lieu of flowers, memorial gifts in memory of John may be made to Griffin Hospital, Attention Bonnie Halligan, 130 Division Street, Derby, CT 06418. Please make checks payable to Connecticut Hospice, Griffin Hospital.

The family of John Bonk created this Life Tributes page to make it easy to share your memories.

Send flowers to the Bonk family.