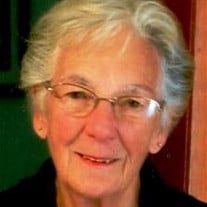 Joan Dziadik Weed, age 82, of Beacon Falls, entered into eternal rest peacefully on Monday, June 22, 2015 at CT Hospice in Branford surrounded by her loving family. She was born in Derby on November 13, 1932, daughter of the late Michael and Gertrude Nelson Dziadik. Joan was the beloved wife of 61 years to Wilbur (Bill) Weed. She had three children, son William and his wife Bonnie of New Milford, son James and his wife Suzanne of Seymour, and daughter Laura and husband Bruce Mitchell of Southbury. Joan was predeceased by her daughter, Linda. She had four grandchildren, Daniel and Benjamin Weed and Ryan and Megan Mitchell. Joan also had two sisters, Greta and husband Jerry Turecek of Shelton and Gertrude and husband Charles Wolski of Depew, NY. She also had many nieces and nephews. Joan was active in the community and church affairs during her lifetime. She taught CCD for St. Michael’s Church, was active in the Ladies Guild and served as treasurer and secretary at various times. Joan was a Den Mother, active in the P.T.A. and helped in the forming of the Beacon Falls Little League in its early days. She also loved to travel in the United States and abroad. Joan went to work when the children got older and was a Teller at the Seymour Trust Company. When the bank changed hands, she concluded her banking years with Merchants Bank. Joan also spent several years working as a Docent at the David Humphreys Homestead (Derby Historical Society) in the 1762 Colonial program founded by Dorothy Larson. Joan loved crocheting, knitting and quilting, and enjoyed meeting with her quilting group to exchange ideas and learn new techniques. She also headed up the Oxford Garden Club and was on the Board of the Seymour Historical Society. A Funeral Service in Celebration of Joan’s Life will be held on Friday, June 26, 2015 at 9:00 am in the Chapel of the Miller-Ward Funeral Home, 260 Bank St (RT 67, across from Klarides Village) Seymour with a Mass of Christian Burial to follow at 10:00 am at St. Michael Church, 25 Maple Ave, Beacon Falls. Interment in the family plot at Mountain Meadows Cemetery, Seymour will follow. Friends and relatives may call at the funeral home on Thursday, June 25, 2015 from 4:00 pm until 7:00 pm. In lieu of flowers, memorial gifts in Joan’s memory may be made to the St. Michael Building Fund, 25 Maple Ave, Beacon Falls, CT 06403.

Joan Dziadik Weed, age 82, of Beacon Falls, entered into eternal rest peacefully on Monday, June 22, 2015 at CT Hospice in Branford surrounded by her loving family. She was born in Derby on November 13, 1932, daughter of the late Michael and... View Obituary & Service Information

The family of Joan Weed created this Life Tributes page to make it easy to share your memories.

Send flowers to the Weed family.