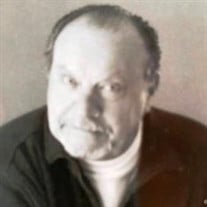 Retired Connecticut State Police Captain Jerome Stanley Drugonis, age 84, of Pittsfield, VT, formerly of Seymour, the beloved husband of Arline Popikas Drugonis, entered into eternal rest peacefully on Wednesday, March 24, 2021 at his home. He was born in Throop, PA on July 24, 1936, loving son of the late John and Lillian Spakowski Drugonis. Shortly after his birth, the family relocated to Seymour where Jerry grew up and went to school, held part time jobs and graduated from Seymour High School 1954. Immediately following high school graduation he enlisted in the Marine Corp and served 8 years active duty in the Far East and in the reserves. Jerry became a Connecticut State Trooper in 1960 and served for 29 years, retiring at the rank of Captain. He served in many positions over these years and played a major role in the establishment of the CT State Police Forensic Lab and was a member of the CT State Police Alumni Assoc. During this period of time, Jerry continued his education and earned an A.S. in Police Science, a B.S. in Business Administration, and a M.S. in Criminal Justice. He taught classes at the University of New Haven, his alma mater as adjunct faculty for several years. For many years Jerry was very active in the Church of the Good Shepherd in Seymour where he served as lector, and on the Parish Council, holding the position of Chairman for several terms; additionally, for more than a decade he was the CYO Director, Director of the Parish Confirmation program and Youth Minister; in recognition of his efforts, he was awarded the “For God and Youth Medal” by the Archdiocese of Hartford. Jerry was one the earliest members of the Parish Men’s Club. He was a member of the Catholic War Veterans in Derby, Valley Detachment U.S. Marines in Seymour, and member and Past Grand Knight of the Aurora Council #53 Knights of Columbus in Seymour and was a competent softball player for their team. Jerry served on the Seymour Police Commission for several years and held the position of chairman for much of the time. For more than a decade he served with the Seymour Fire Department as a member of Great Hill Hose. Additionally, Jerry was a member of the David Miles Post, American Legion of Oxford and upon relocating to Vermont joined Post 31 in Rutland VT. Upon moving to Pittsfield, Jerry served on the town’s Planning Commission, represented the town of Pittsfield on TROC Regional Commission and also was elected to several terms on the town’s Selectboard. After encouragement from his family, he wrote and had published a novel “Lives, Fortune and Sacred Honor”. A sequel was never completed. In addition to his loving wife of 60 years Arline, a union that Parade Magazine described as a “storybook romance", his family includes his sons Christopher (Annmarie) Drugonis of Seymour, CT and Matthew Drugonis of Robbinsville, NC, his son-in-law Tommy Wilcox of Robbinsville, NC, his cherished granddaughter Alana Isabella Drugonis who lovingly called him "Grumps" and his lifelong friend of 81 years Bill Dembeck. Jerry was predeceased by his loving daughter Mary Wilcox and his brother Kenneth Drugonis. A Mass of Christian Burial will be Celebrated on Wednesday, March 31, 2021 at 10:00 am DIRECTLY at St. Nicholas Parish, Church of the Good Shepherd, 135 Mountain Road in Seymour. Interment, with full military honors accorded, will follow in the family plot at Mountain Meadows Cemetery in Seymour. Friends and relatives may attend a walk through visitation on Tuesday, March 30, 2021 at the Miller-Ward Funeral Home, 260 Bank Street (Rt. 67, across from Klarides Village) Seymour from 4:00 pm until 7:00 pm. Visitors will be asked to wear masks and adhere to social distancing requirements at all times. It is kindly asked that all visitors enter the funeral home through the rear door and exit through the front door after greeting the family to accommodate all guests. In lieu of flowers, memorial gifts in Jerry's memory may be made to the Wounded Warrior Foundation or the Capt. Jerry Drugonis Memorial Scholarship Fund, both through the funeral home. OORAH! Semper Fi

The family of Jerome Stanley Drugonis created this Life Tributes page to make it easy to share your memories.

Send flowers to the Drugonis family.