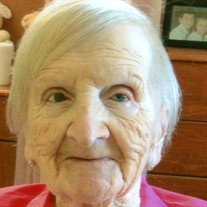 Jennie Montagnino, age 100, of Glastonbury passed away peacefully on August 8, 2017. Jennie was born June 20, 1917 grew up and lived most of her life in Bridgeport,CT, the daughter of the late Leonard DiBenedetto and Rosina DiBenedetto. Jennie attended Warren Harding High School, and married Anthony J. Montagnino, with whom she shared over 30 very happy years. Jennie leaves two daughters , Patricia Olson and her husband Lee Olson of Sarasota, Florida and Jeanne Stoccatore (deceased husband James A. Stoccatore, Jr.) and Jeanne's partner Jim Anderson of Glastonbury. Jennie was blessed with grandchildren, James Olson and wife Lucy Olson of Oxford; Lori Beyer and husband Mark Beyer of Derby; Valerie Taylor and husband Craig Taylor of Glastonbury; and Jay Stoccatore and his wife Himali Stoccatore of Glastonbury. Her great joy also were her great-grandchildren, Justin and Marina Olson; Andrew and Alayna Taylor; Ryan and Davina Stoccatore. Very special to Jennie were her niece Virginia Spencer and her deceased husband Jim, and nephew Edward Montagnino and his wife Evelyn. Jennie was honored with a milestone 100th Birthday Party in June with family and friends sharing this wonderful celebration with her. A Funeral Service will be held on Friday, August 11, 2017 at 10:00 am, in the Chapel of The Miller-Ward Funeral Home, 260 Bank St. (RT 67, across from Klarides Village), Seymour; followed by burial at St. Michael Cemetery, Stratford, CT. In lieu of flowers, donations in memory of Jennie can may be made to" Healing Meals" Community Project, P.O. Box 501, Simsbury,CT 06070.

Jennie Montagnino, age 100, of Glastonbury passed away peacefully on August 8, 2017. Jennie was born June 20, 1917 grew up and lived most of her life in Bridgeport,CT, the daughter of the late Leonard DiBenedetto and Rosina DiBenedetto.... View Obituary & Service Information

The family of Jennie Montagnino created this Life Tributes page to make it easy to share your memories.

Send flowers to the Montagnino family.