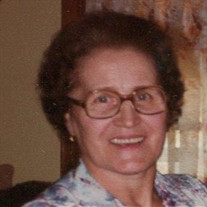 Jean (Babcia) Orszulak, 86 of Seymour, passed away on Friday July 4, 2014 at her daughters home where she resided for the pass fourteen (14) years. Born in France in Sept. 19, 1927. Where she was seven she moved with her parents and sister to Skrszynka Poland. The daughter of the late Katarzyna Kurosz and Jan Sieczkowski. Where she met and married her husband Henryk Orszulak. In 1962 they immigrated to the United States in search of a better life and settled with their three children in Bridgeport. Though they spoke no English they found productive jobs which enabled them to provide a home, food, and education for their children. She was employed by Cornwall & Patterson for many years as an production assembler later she worked in Bridgeport Hospital in the housekeeping Department. She would always smile when on hearing from her daughter in law Lynda about giving her a ‘big mooch”. She also loved to garden and work in the yard and tend to her flowers. And when it snowed she couldn’t wait to go outside and shovel the snow. Her faithful dog and constant companion Diesel for the past ten (10) years will miss her. Her niece and god daughter Irena, was always there to help whenever it was needed. For that we thank you. A special friend of our family Carol Lehrer would stop by often with her daughter Sammy to see how babcia was doing and not forgetting to bring her special drink a coffee colada. She loved her visits from cousin Mitch whenever he would stop by to see her. A very special thank you goes out to Dr. Jutkowitz who treated her for more than 35 years. He was more than her doctor he respected her and actually took the time to talk and listen to her. A thank you goes out to Dr. Jacqueline Herschel and her staff at the Adler Geriatric Center for all the years treating her for Alzheimer’s. The family would like the express their gratitude to Connecticut Vitas (Hospice) for all the support and comfort to babcia in her final year. Thank you to Selina, Allison and Cathy for the care they provided in her last few months. Her loving family includes her daughter Elizabeth (Liz) Holly and her husband TSGT Theodore Holly Jr. US Air Force retired of Seymour, two sons MSgt Ted Orszulak USMC Retired and his wife Lynda of North Carolina and John Orszulak and his wife Mary Ann of Granby. Grand Children Ted Holly III, Jake Holly and his wife Robyn, Robert Holly of Seymour. John Orszulak and his wife Debbie, Jennifer DuBois and her husband Joe, and Michael Orszulak of Granby. Amanda Orszulak of N.C Beth Orszulak of Texas, Valarie Schrader and husband Dan, Amanda Grantom and husband Rhett and Natasia Blincoe of N.C. Great-great grand children Tyler & Levi Holly, James and McKenzie DuBois, John-Glen Blincoe, Lynde Grantom, Kaleb and Addison Schrader, Aden Cockerham and Mariah Orszulak. She also leaves behind sisters Czeslawa, Krystyna and a sister in law Julia. She was predeceased by her husband of 40 years Henryk, siblings Anna, Stefania, Josef, and Wojciech. A sister in law Katarzyna and an infant son Boleslaw. A Mass of Christian Burial in Celebration of Jean's life will be held DIRECTLY at St. Michael's Church, 75 Derby Ave, Derby, CT on Saturday July 12, 2014 at 10:00 a.m. Interment in the family plot will follow in Mount St. Peter Cemetery, Derby. Friends and relatives may call at the Miller-Ward Funeral Home, 260 Bank Street (RT 67, across from Klarides Village) Seymour on Friday, July 11 from 4:00 pm until 8:00 pm. Memorial gifts in Jean's memory may be made to St. Michael's Church, 75 Derby Ave., Derby, CT 06418 or Yale New Haven Hospital (Attn: Adler Geriatric Center) 20 York St., New Haven, CT 06510. To light a virtual candle or leave online condolences please visit www.millerwardfuneralhome.com

Jean (Babcia) Orszulak, 86 of Seymour, passed away on Friday July 4, 2014 at her daughters home where she resided for the pass fourteen (14) years. Born in France in Sept. 19, 1927. Where she was seven she moved with her parents and sister... View Obituary & Service Information

The family of Jean Orszulak created this Life Tributes page to make it easy to share your memories.

Jean (Babcia) Orszulak, 86 of Seymour, passed away on Friday...

Send flowers to the Orszulak family.