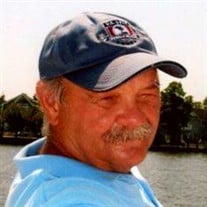 James Stephen Mihalovic, age 72, of Seymour, the loving husband of 30 years to Donna Sorensen Mihalovic, passed away peacefully on Friday, July 26, 2019 at Shady Knoll Health Center surrounded by his loving tribe. He was born in Bridgeport on September 18, 1946, son of the late Stephen and Irene (Palchak) Mihalovic. Jim was a graduate of Central High School of Bridgeport and proudly served his country in the United States Army in Vietnam from 1965-67. He was a Master Carpenter by trade, often self employed, but also worked for the Kitchen Mill, Cornerstone Construction, and KB Carpentry. Jim loved trips to the casinos, Mohegan Sun, and fun trips to Atlantic City with Aly and Molly. He was an avid golfer and loved the beach and most days he could be found at Fairchild Wheeler or Seaside Park in his childhood city of Bridgeport. In Seymour, he could be found daily at the local Stop and Shop. Most of all, Jim will miss spending time with his family and many friends and will be sadly missed by all, but will remain forever in our hearts. His family would like to thank his team of caretakers from Shady Knoll who made the last two years of his life his home. His loving family includes his four daughters Stefanie Poulos, Kristin Ruszkowski and her husband Stanley, Jennifer Edwards and her husband Christopher and Colleen Hogue, his five cherished grandchildren, who lovingly called him Papa, Alyson Waldron, Hailey and Jacob Ruszkowski and CJ and Ryan Edwards, his nephew David Mihalovic, his sisters in law Patty Farrell and her husband and Jim's best friend James and Kristen Borogognone and her husband Keith and his brother in law Paul Sorensen and his wife Karen. Jim was predeceased by his brother Ronald Mihalovic and his in-laws Donald and Kathleen Sorensen. A Funeral Service in Celebration of Jim's life will be held on Monday, July 29, 2019 at 7:00 pm in the Chapel of the Miller-Ward Funeral Home, 260 Bank Street, (RT 67, across from Klarides Village) Seymour. Friends and relatives may call at the funeral home on Monday from 4:00 pm until 7:00 pm. Burial will be private and at the convenience of the family. Memorial gifts in Jim's memory may be made to Seymour Pink, PO Box 333, Seymour, CT 06483.

James Stephen Mihalovic, age 72, of Seymour, the loving husband of 30 years to Donna Sorensen Mihalovic, passed away peacefully on Friday, July 26, 2019 at Shady Knoll Health Center surrounded by his loving tribe. He was born in Bridgeport... View Obituary & Service Information

The family of James Stephen Mihalovic created this Life Tributes page to make it easy to share your memories.

Send flowers to the Mihalovic family.