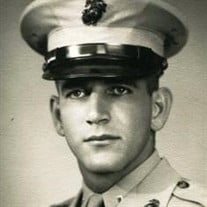 James Clarence Hummel, age 85, of Southbury, died peacefully on October 4, 2019 surrounded by his loving family. He was the loving husband of Jean Smith Hummel. Jim was born on June 11, 1934 in Derby. He was the son of the late Clarence G. Hummel and Eleanor Kibbe Hummel and was a resident of Southbury for over 53 years. Jim graduated from Seymour High School in 1952 and from Bucknell University in 1956. He was a three sport athlete at Seymour High School and went on to play baseball for Bucknell and the Quantico Marine Corps baseball teams. Jim was inducted into the Seymour High School Sports Hall of Fame in 2019. He was a veteran of the United States Marine Corps where he served as Executive Officer of "F" Company, 2nd Battalion, 2nd Marines during the Lebanon Campaign of 1958. Jim was awarded the Armed Forces Expeditionary Medal and a Certificate of Achievement for his professionalism in the campaign. He was discharged as a Captain in the USMC Reserves in 1969. Jim was employed by the Southern New England Telephone Company for 32 years where he was a Manager of various engineering and plant operations in the Hartford, Danbury, New Haven and Bridgeport areas before his retirement in 1992. He was a member of the Seymour Congregational Church and the United Church of Christ in Southbury. During the 1970's and 1980's Jim was a Director for the Seymour Trust Company. He was active in community affairs as a member of the Southbury Republican Town Committee and the Southbury Parks and Recreation Commission. Jim was a founder of the Southbury Pop Warner program and a coach of the Southbury Babe Ruth team in the Litch Haven League for several years. He was an avid golfer and a member of the Heritage Village Country Club for more than 35 years. Besides his wife, Jim leaves a son Matthew and his wife Beth of Glastonbury and their children Hannah and Maxwell, a daughter Linda and her husband George Brouwer of Warren, Maine and their children Christopher and Heather, and a daughter Jennifer and her husband John Rannestad of Chester and their children Eric and Austin. He was predeceased by his brother John K. Hummel of Seymour. Those wishing to pay their respects, may visit the family home in Southbury on Friday, October 11 from 3:00 pm until 7:00 pm or on Saturday, October 12 from 10:00 am until 1:00 pm. All other services are private and at the convenience of the family. In lieu of flowers, memorial gifts may be made to CT Hospice, 100 Double Beach Road, Branford, CT 06405.

James Clarence Hummel, age 85, of Southbury, died peacefully on October 4, 2019 surrounded by his loving family. He was the loving husband of Jean Smith Hummel. Jim was born on June 11, 1934 in Derby. He was the son of the late Clarence G.... View Obituary & Service Information

The family of James Clarence Hummel created this Life Tributes page to make it easy to share your memories.

Send flowers to the Hummel family.