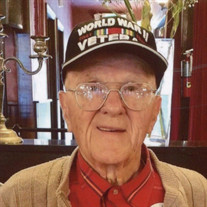 Henry A. Kornacki (“Hank”) passed away peacefully at the VA Hospital in West Haven, where he was receiving hospice care, on June 28, 2021. He was 97. Henry was born and raised in Terryville, Connecticut, the son of Walter and Lottie Murawski Kornacki and endured many hardships during the Great Depression, including the death of his mother when he was eleven years old. Despite the adversity of the times, Henry developed a positive and confident outlook on life while also becoming an avid fisherman and hunter. He subsequently graduated from Terryville High School in 1943 as President of his senior class and was also a member of the basketball team and the debating club. Following his high school graduation, Henry was called into service with the U.S. Navy and served as a Pharmacist Mate and Operating Room Technician aboard the hospital ship U.S.S. Repose in the Pacific. In addition to operating in a combat environment, the ship nearly capsized in a typhoon with 145 mph winds and 75-foot waves and spent 2 ½ days transiting the treacherous seas before reaching safe water. Henry’s service during the war was a source of tremendous pride for him throughout his entire life. He was rarely seen without his WW II Navy Veteran ball cap in recent years, and his license plate proudly displayed “HAK USN.” Following his discharge from the service at the end of the war, Henry enrolled at the University of Bridgeport and took collateral courses at the University of Pennsylvania. While in Philadelphia, he worked at the renowned Wistar Institute of Anatomy and Biology. He graduated from the University of Bridgeport in 1950. Upon graduation, Henry joined McKesson & Robbins as a Territory Salesman and quickly became recognized as a top-performer with exceptional selling skills and an uncanny ability to forge lasting relationships. His sales and marketing career spanned 29 years and included numerous awards and promotions to increased levels of responsibility from Field Sales Manager to Eastern Regional Sales Manager, National Field Sales Manager, Director of Marketing, and ultimately as Vice President of Market Development. During this time, Henry was an active member of the Fayerweather Yacht Club in Black Rock Harbor. He took great pride in applying five coats of varnish each year to his 25-foot double planked mahogany Owens boat, the “Oh Henry” to make it stand out. He was the first Editor of the club’s newsletter, the Fog Horn, and subsequently became Commodore of the Club. Upon his retirement from McKesson, Henry embarked on his second career in real estate sales with Connecticut Prudential Realty where he received numerous awards for outstanding sales achievement. His involvement with the Mead Farm subdivision in Seymour was a source of special pride to him since he established his residence there in 1986 and went on to sell every property at the site. In the process, he built lasting relationships with numerous homebuyers who became neighbors and friends. Henry retired from the real estate profession in 2007. Henry was preceded in death by his beloved wife of 43 years Julia (Judy) Zdanowich Kornacki. The couple resided in Seymour from ‘86 until her passing on February 14, 2008. Henry always considered his marriage to Judy to be the highlight of his life. With no children of his own, Henry nurtured a close and life-long relationship with his two nephews Stanley (Jack) Kornacki of South Windham and Stephan (Steve) Kornacki of Brunswick, Maine. In addition to his nephews, he is also survived by Jack’s wife Ellen and their three daughters (Christa Pannorfi and husband Dave, Tracey Kornacki, and Julie Newman and husband Chris), as well as Steve’s wife Anne and their two children (Katie Kornacki and Steve Kornacki) and niece Mary Lou Zdanowicz. He also leaves behind several great-grandnieces and a great-grandnephew. The family would like to extend special thanks to Mike Mathews and Kim Warner, who established and ran the General Store in Seymour for several years, as well as Henry's caring aides Kerry Magrath and Chrystal Andrews. They welcomed Henry as a cherished friend and confidante during his time of great sorrow after Judy passed away. Over the next several years, Henry became a local character of sorts and goodwill ambassador at the General Store with his dedicated parking space out front and table inside where he regularly held court, particularly on Open-Mic nights. This unique social setting became his refuge and source of enduring friendships. A Funeral Service in Celebration of Henry's Life will be held on Friday, July 2, 2021 at 9:15 am at the Miller-Ward Funeral Home, 260 Bank Street in Seymour, with a Mass of Christian Burial to follow at 10:00 am at Church of the Good Shepherd Church, 135 Mountain Rd. Seymour. Full Military honors will be accorded after the Mass. Friends and family may call on the family Thursday, July 1,2021, from 3:00 to 6:00 pm. Interment in Oaklawn Cemetery in Fairfield, Ct, will be held at the convenience of the family. In lieu of flowers, donations may be made to the American Legion, The Veterans of Foreign Wars or Voluntary Service, VA Connecticut Healthcare System (For CLC Hospice Program) through the funeral home.

Henry A. Kornacki (&#8220;Hank&#8221;) passed away peacefully at the VA Hospital in West Haven, where he was receiving hospice care, on June 28, 2021. He was 97. Henry was born and raised in Terryville, Connecticut, the son of Walter and Lottie... View Obituary & Service Information

The family of Henry A. Kornacki created this Life Tributes page to make it easy to share your memories.

Henry A. Kornacki (“Hank”) passed away peacefully at the VA Hospital...

Send flowers to the Kornacki family.