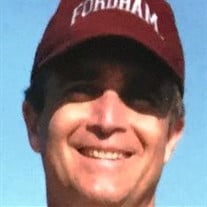 Gregory Curtis Pierce of Oxford, CT (formerly of Newtown) passed away peacefully on Wednesday, March 11, 2015 with family by his side after a short and courageous battle with cancer. He loved his wife, loved his family, and loved his life. He was born on November 25, 1952 in Albany, NY. He earned his A.S. from Westchester Community College and graduated Alpha Beta Gamma. He went on to earn his B.S. from Ramapo College of New Jersey and M.B.A. from Fordham University, graduating Beta Gamma Sigma. He worked in finance for IBM from 1982-1994 before joining Daymon Worldwide of Stamford, CT until his retirement in 2012. His interests included flying (he soloed in a Cessna 150), motorcycles (his Harley-Davidson Sportster was his favorite), racing (built and raced his own car at the Orange County Fair Speedway and, years later, graduated from the Skip Barber Racing School in an open-wheel formula car-a highlight of his life.) He could listen to James Taylor for hours or wipe tears from his eyes listening to the Boston Symphony at Tanglewood. John Irving made him think, Bill Bryson made him laugh, and a cold beer on a hot day topped it all off. He was a devoted family man and cherished every day with them. He leaves behind his loving wife of 38 years Mary Lou, who was by his side each day. His son Michael Pierce and his wife Shannon of Monroe, CT, and his son Christopher Pierce and his wife Laura of Blanchard, Idaho. He was delighted by his four grandchildren. He is also survived by his mother and two sisters. He was loved by many nieces and nephews, and extended family and friends. A Memorial Service in Celebration of Gregory's life will be held on Sunday, March 15, 2015 at 5:30 pm in the Chapel of the Miller-Ward Funeral Home, 260 Bank St. (opposite Klarides Village, Rt. 67) Seymour with Rev. Joseph Shepley of St. Paul's Episcopal Church of Brookfield, officiating. Friends and relatives may call at the funeral home on Sunday from 4:00 pm until 7:00 pm. Interment will be private and at the convenience of the family. Expressions of sympathy in Gregory's memory may be made to The American Cancer Society so we can work to find a cure. To light a virtual candle and leave online condolences please visit www.millerwardfuneralhome.com

Gregory Curtis Pierce of Oxford, CT (formerly of Newtown) passed away peacefully on Wednesday, March 11, 2015 with family by his side after a short and courageous battle with cancer. He loved his wife, loved his family, and loved his life.... View Obituary & Service Information

The family of Gregory C Pierce created this Life Tributes page to make it easy to share your memories.

Send flowers to the Pierce family.