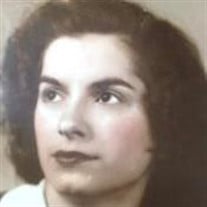 Gloria Morcaldi McGeever, 91, slipped from life into the loving arms of our Lord on Wednesday, June 20, 2018. A lifelong Connecticut resident, Mrs. McGeever was born in New Haven to the late Fedele and Josephine (Ciarleglio) Morcaldi. Although Gloria considered herself a "New Haven Gal" proudly recounting her younger years growing up in the city, graduating from Hillhouse High School and working downtown at the Knights of Columbus, she also loved the small town of Beacon Falls where she resided for over 60 years. She moved to Beacon Falls when she married John McGeever, to begin a country life away from the city. She collected a menagerie of animals and countless new friends. Her favorite pets were Herschel the mutt that kept her entertained and Whiskers the Shetland pony, born at the farm, he delighted everyone for over 40 years. Gloria served on boards and commissions in town and worked tirelessly. Of all her civic acts, Gloria was most proud of her involvement in the creation of the Pollution fighting “Citizens Rebellion Against Pollution” The group successfully defeated the State DEEP plan to locate a regional landfill on the banks of the Naugatuck River in Beacon Falls. She loved Beacon Falls with its magical hills, streams, deep forests, and majestic animal inhabitants that she fought hard to conserve and protect. She was also a dedicated kindergarten teacher for over 20 years at St. Michael’s school in Derby, CT. In fact during a recent stay at Griffin Hospital, former students stopped in to visit her and declared her to be the “Best Teacher” they ever had. In retirement she most enjoyed spending time with her grandchildren. Her farm was a magnet to both family and friends. Her knowledge of gardening was immense and grew more with her love of reading and sharing gardening tips and plants with others. She was a member of the Naugatuck and Beacon Falls Garden Clubs. Most of all she enjoyed sharing delicious home cooked food and conversation with family and friends around the kitchen table, eating her homemade treats and most famously her homemade crusty italian bread and pizza fritta. Gloria lives on in the memories of her friends and family who were fortunate enough to be part of her spirited life. Gloria was predeceased by her loving husband of 62 years, John McGeever, and her brothers James, Frank, Fred and Edward Morcaldi. She is survived by her brother Joseph Morcaldi, daughter and son-in-law Josepha McGeever Brusznicki and George Brusznicki of Beacon Falls, son and daughter-in-law John and Katherine (Lynch) McGeever of Kensington, CT. She is also survived by four grandchildren: Christopher Brusznicki and wife Maureen (Smithe), Joseph Brusznicki and wife Elizabeth (Lewicki), John Andrew McGeever VI, and Clare McGeever. Gloria was blessed to have known her nine cherished great grandchildren, Evelyn, Christopher (Mack), Ava, Vivian, Joseph (JJ), Benjamin, Elinor, Juliet and Oliver Brusznicki. Gloria practiced what she preached, “always have an open door, delicious home cooked food and always listen.” She had the ability to empathize and advise from the heart. Her favorite saying, “good deeds are ever bearing fruit.” Gloria's final wish was to send her love to her family and friends. There are no calling hours. Burial is at the convenience of the family.

Gloria Morcaldi McGeever, 91, slipped from life into the loving arms of our Lord on Wednesday, June 20, 2018. A lifelong Connecticut resident, Mrs. McGeever was born in New Haven to the late Fedele and Josephine (Ciarleglio) Morcaldi. Although... View Obituary & Service Information

The family of Gloria Morcaldi McGeever created this Life Tributes page to make it easy to share your memories.

Gloria Morcaldi McGeever, 91, slipped from life into the loving...

Send flowers to the McGeever family.