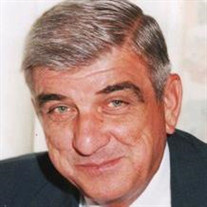 George Robert Hamila, Jr., Retired Connecticut State Trooper, age 81, of Oxford, the beloved husband of Margaret Crocamo Hamila, entered into eternal rest peacefully on Sunday, December 1, 2019 at his home surrounded by his loving family. He was born in Bridgeport on September 19, 1938, loving son of the late George and Elizabeth Pistey Hamila, Sr. George proudly served his country during the Vietnam Era with the United States Army 475th Engineers 82nd Airborne. After his service to his country, he was an employee with Sikorsky Aircraft before going on to a 21 year career as a Detective with the Major Crimes Squad for the Connecticut State Police, Troop I, Bethany. George enjoyed fixing things and was the person to go to when things were broken. He was a communicant of St. Thomas the Apostle Church of Oxford, was a Fire Commissioner for the Town of Oxford, a member of the Senior Center and a fan of the Boston Red Sox. George was also a member of the David S. Miles Post 174 American Legion of Oxford, the Echo Hose Hook and Ladder Company of Shelton and the Oxford Center Fire Company. Most of all, George loved to spend time with his family and many friends. He will be sadly missed by all but will remain forever in our hearts. His loving family in addition to his wife Margaret includes his two sons George R. Hamila, III of Newport News, VA. and Robert Hamila and his wife Bethann of Oxford, his daughter Lindsay Wayman of Waterbury, his three cherished grandchildren Kaitlyn, Matthew and Robert Hamila, his four cherished great grandchildren Joey, Emma and Arthur Hamila and Artemis Stevenson and several nieces and nephews. George was predeceased by his first wife Patricia Murray Hamila (1992) and his step father Frank Soltis. A Mass of Christian Burial in Celebration of George's Life will be held on Thursday, December 5, 2019 at 10:00 am (DIRECTLY) at St. Thomas the Apostle Church, 733 Oxford Road, Oxford. Interment, with Full Military Honors accorded will follow at Southford Cemetery, Oxford. Friends and relatives may call at the Miller-Ward Funeral Home, 260 Bank Street (RT 67, across from Klarides Village) Seymour on Wednesday, December 4, 2019 from 4:00 pm until 8:00 pm. In lieu of flowers, memorial gifts in George's memory may be made to the David S. Miles Post 174 American Legion of Oxford through the funeral home.

The family of George Robert Hamila Jr. created this Life Tributes page to make it easy to share your memories.

Send flowers to the Hamila family.