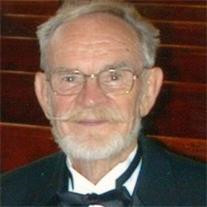 George Stephen Blasko, age 86 of Southbury, formerly of Beacon Falls and Trumbull, beloved husband of 64 years to Vivian Beckwith Blasko, entered into eternal rest peacefully on Tuesday, August 13, 2013 at Waterbury Hospital. George was born on December 22, 1926, in Stratford,CT, the son of the late George and Mary Stalmach Blasko. George was a devout communicant of St. Michael Church, Beacon Falls. He worked for the Defense Logistics Agency for The United States Federal Government having worked for 37 years of service before his retirement. George enjoyed wood working, tinkering with engines and going to tag sales . He was also an avid fisherman and hunter. George served with pride and honor in the U.S. Navy during WWII as a Radar Man Third Class aboard the U.S.S. Joseph M. Auman. He was also the recipient of the Asiatic Pacific Theatre Medal 1 Star, the American Theater Medal and the Victory Medal. George loved being with his family and friends and will be sadly missed by all and will be forever in our hearts. In addition to his beloved wife Vivian, his loving family includes two caring sons David P. Blasko and his wife Dorothy of Naugatuck, Gregory G. Blasko and his wife Erin of Thomaston, a devoted daughter Dawn E. Dennis and her husband Andrew of Southbury, a loving brother Paul Blasko and his wife Linda of Oregon, six cherished grandchildren Erica, Julia, Katherine, Jack, Abigail and Olivia. and several caring nieces and nephews. He was predeceased by his two beloved children, daughter Suzanne L. Blasko, son Robert W. Blasko, a beloved sister and brother Marge LaPlaca and William Blasko. A Mass of Christian Burial will be held on Friday, August 16, 2013 at 10:00 am DIRECTLY at St. Michael Church, 25 Maple St., Beacon Falls. Interment in the family plot with full military honors to be accorded in St. Michael Cemetery, Stratford. . Friends and relatives may call at The Miller-Ward Funeral Home, 260 Bank Street, 'Rte 67' Seymour (opposite Klarides Village) on Thursday from 5:00 - 8:00 p.m Memorial Gifts may be made in George's memory to The Wounded Warrior Project, P.O. Box 758517, Topeka, Kansas, 66675 or [email protected]

The family of George Blasko created this Life Tributes page to make it easy to share your memories.

Send flowers to the Blasko family.