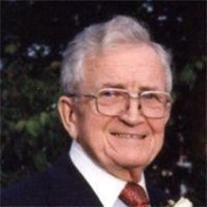 Frank John Yurczyk, Sr., 92, of Bethany, the beloved husband of Irene Mary Kondash Yurczyk, entered into eternal rest on Sunday, October 16, 2011 at Hilltop Healthcare of Ansonia. He was born in New Haven on October 28, 1918, son of the late John and Victoria Yurczyk. Frank was a clothing salesman for 40 years for J. Press Clothiers of New Haven. He was a communicant of Our Lady of the Assumption Church of Woodbridge and was an usher for 50 years. He was a graduate of Hillhouse High School of New Haven, Class of 1936 and attended the University of New Haven. Frank served in the US Army Air Corps from 1943 to 1946 and was a member of the DAV of West Haven. He resided in Bethany for 56 years, previously residing in New Haven. He enjoyed gardening, raising rabbits and was an organic farmer. He was also an avid reader. His loving family, in addition to his beloved wife, Irene, includes his caring sons, Paul Yurczyk and his wife, Connie, of San Diego, CA, Frank Yurczyk, Jr. and his wife, Michele, of Cheshire; his loving daughter Mary Lou Viola of Milford; his beloved sisters, Jean Yurczyk of West Haven, Helen Rothfuss and her husband, William, of Clinton; and his cherished grandchildren, Christopher, Paul Jr,. and Kaylee Yurczyk of San Diego, CA and Joseph and Alexis Yurczyk of Cheshire; and his devoted son-in-law, John McNamara and his wife, Pamela Smith; and several loving nieces and nephews. He was predeceased by his cherished daughter, Janet McNamara and his beloved brothers, Thaddeus and Daniel Yurczyk. The family of Frank John Yurczyk, Sr. wish to thank the caring and compassionate staff of Hilltop Healthcare while he was a patient at their facility. A Mass of Christian Burial in Celebration of Frank's life will be celebrated on WEDNESDAY, OCTOBER 19, 2011 at 10:00 am (DIRECTLY) at the Our Lady of the Assumption Church, 81 Center Road, Woodbridge. Interment with military honors accorded will be in the family plot at Carrington Cemetery, Bethany. There will be no calling hours. In lieu of flowers, expressions of sympathy in Frank's memory may be made to the Bethany Library Association, c/o The Clark Memorial Library, 538 Amity Road, Bethany, CT 06524 ATTN: James Foley.

Frank John Yurczyk, Sr., 92, of Bethany, the beloved husband of Irene Mary Kondash Yurczyk, entered into eternal rest on Sunday, October 16, 2011 at Hilltop Healthcare of Ansonia. He was born in New Haven on October 28, 1918, son of the late... View Obituary & Service Information

The family of Frank Yurczyk, created this Life Tributes page to make it easy to share your memories.

Send flowers to the Yurczyk, family.