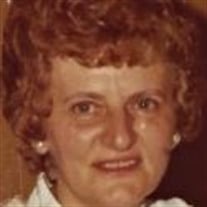 Estelle S. Wildman, age 90, of Woodbridge, beloved wife of the late Harold Wildman, entered into rest peacefully on Wednesday, March 13, 2019 at Brookdale Senior Living in Woodbridge. She was born in Bridgeport, CT on December 11, 1928, daughter of the late Stephen and Petrone Pechkos Sheliski. Her mother, through the naturalization process, legally changed the family name to Sulinsky. She met, fell in love and married Harold “Whitey” Wildman on July 14, 1951. They had a wonderful marriage and enjoyed their home in Beacon Falls. Whitey passed away on August 27, 1987. Estelle was a hard-working woman who held various positions at The Singer Company in Bridgeport CT until they closed their doors and moved out-of-state. She and several other employees then accepted positions with Philips Medical in Shelton CT. She was there until her retirement after which she held part time jobs cashiering at Klarides Market in Seymour and Adams in Derby. She was a sports enthusiast and played softball, bowling and roller skating. Her memory will be cherished by sister Claire Carroll of Southbury CT, numerous nieces and nephews and their children and grandchildren. She is preceded in death by her husband Whitey, her parents, brothers Bill and John Sulinsky and sisters Theresa Sulinsky, Francis Cone of FL, Florence Ruoss of CA and Mary Spelman of Milford CT. A Memorial Service for Estelle will be held on Saturday, April 6, 2019 at 10:00 am in the Chapel of The Miller-Ward Funeral Home, 260 Bank St. (RT 67, across from Klarides Village) Seymour. Inurnment will be held privately at Riverside National Cemetery, Riverside, California. In lieu of flowers, donations may be made in Estelle's memory to the Dementia Society of America PO Box 600, Doylestown, PA 18901.

The family of Estelle S. Wildman created this Life Tributes page to make it easy to share your memories.

Estelle S. Wildman, age 90, of Woodbridge, beloved wife of the...

Send flowers to the Wildman family.