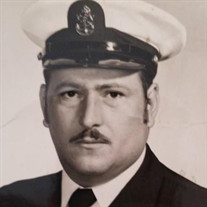 Retired Master Chief Petty Officer Enio “Pooch” Pucci was a loving husband, father, grandfather, and mentor to many throughout his life. The world darkened a little when he passed on June 16th, 2021 at age 77. Enio was born in Derby, Connecticut but spent much of his life serving his country around the world in the U.S. Navy including service during the Vietnam conflict aboard his favorite battleship, the USS New Jersey- of which he is an official “Plank Holder”. After living in California for a time, Enio returned to Connecticut with his wife, Lorraine, to raise three children whom he loved greatly. “Pooch” turned into “Grandpa” when he met his grandchildren. He took great pride in them and loved each one immensely. While sometimes stoic and reserved, Enio’s love for his children and grandchildren shined through. His mustached smile, ever-present black coffee, and bad puns would define and lighten any room. Pooch was a teacher, instructor, and mentor for many. He took great pleasure in teaching the finer details of chess, how to win at cribbage, how to grow a garden, or how to work your way around a garage. Because of this, Pooch served as a father figure for many outside his immediate family. Be it the sailors who he served with, the employees he managed during his twenty years at Sikorsky Aircraft, the kids that his children were friends with, or the generations of kids who he coached on the football field, Enio was a mentor and iconic role model. There are not enough words to describe all he achieved in life or enough editors on staff to make the stories of his naval life suitable for public consumption. All that can be said is that we will all carry his love of family and life with us, and through those he inspired he will be immortal in spirit. Enio is survived by his beloved wife of over 50 years Lorraine as well as his children. Daughter Kathleen and son in law Jeffrey Vrlik of Seymour, David Pucci of Oak Harbor, WA and Michael Pucci and daughter in law Catherine Griffin of Meriden. In addition, he is survived by his grandchildren: Kellen, Aidan and Kyla Vrlik, and Mari Pucci; his sister Tina Velleco of Seymour; sister Dolores Moore of San Jose, CA and half brother Alton Goad of Buckeye, AZ as well as numerous beloved nieces and nephews. He is predeceased by his sisters Genevieve, Shirley, Christina and Patricia, and best friend Jimmy Musto as well as his adored grandson Alexander Pucci, with whom, we know, he is throwing a ball and teaching the finer points of a flea flicker. “Shipmate... the watch stands relieved Relieved by those You have trained ,Guided, and Led Shipmate you stand relieved.. we have the watch... Fair winds and Following Seas shipmate. Thank you. We love you Dad. A graveside funeral service will be held on Saturday, June 26th at 10:00 am for friends and family at Mount Saint Peter Cemetery in Derby, Connecticut. In lieu of flowers, the family has requested that donations be made in his memory to the First Responder organization of your choice.

Retired Master Chief Petty Officer Enio &#8220;Pooch&#8221; Pucci was a loving husband, father, grandfather, and mentor to many throughout his life. The world darkened a little when he passed on June 16th, 2021 at age 77. Enio was born in Derby,... View Obituary & Service Information

The family of Enio "Pooch" Pucci created this Life Tributes page to make it easy to share your memories.

Send flowers to the Pucci family.