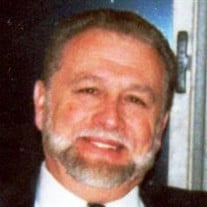 Edward H. Gibson, Sr., age 74, of Oxford, the beloved husband of 16 years to Theresa Martino Gibson, entered into eternal rest peacefully on Saturday, January 5, 2019 at his home. He was born in Bridgeport on November 2, 1944, beloved son of the late Thomas and Helen Konski Gibson. Edward was a communicant of Holy Rosary Church in Ansonia and was retired Cable Technician for AT&T. After graduating from Stratford High School, he enlisted and proudly served in the United States Navy for several years. Edward was an avid SCUBA Diver and dove in many places including the Bahamas and the Florida Keys. He was a avid cook, loved the New York Giants and enjoyed watching the birds at his bird feeder. Most of all, though, he loved spending time with his family and many friends. Edward will be sadly missed by all, but will remain forever in our hearts. His family, in addition to his loving wife Theresa, includes his caring step daughter Robin Mirisola of Shelton and his two cherished grandchildren Tiffany Gibson of Shelton and Edward Gibson, III of West Haven and a cherished great grandson Liam Friot. He was predeceased by his son, Edward Gibson, Jr. A Funeral Service in Celebration of Edward’s Life will be held on Thursday, January 10, 2019 at 9:15 am at the Miller-Ward Funeral Home, 260 Bank Street (RT. 67, across from Klarides Village) Seymour with a Mass of Christian Burial to follow at 10:00 am at Holy Rosary Church, 10 Father Salemi Drive, Ansonia. Interment, with fully military honors accorded, in the family plot at Mountain Meadows Cemetery, Seymour will follow. Friends and relatives may call at the funeral home on Thursday morning from 8:30 am until 9:15 am. Memorial contributions in memory of Edward may be made to The David S. Miles Post 174, American Legion ,through the funeral home.

Edward H. Gibson, Sr., age 74, of Oxford, the beloved husband of 16 years to Theresa Martino Gibson, entered into eternal rest peacefully on Saturday, January 5, 2019 at his home. He was born in Bridgeport on November 2, 1944, beloved son of... View Obituary & Service Information

The family of Edward H. Gibson created this Life Tributes page to make it easy to share your memories.

Send flowers to the Gibson family.