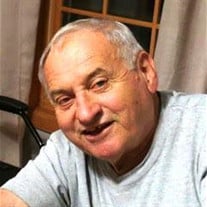 Dietrich J. Neumahr, age 76, of Derby, passed away on Sunday, December 22, 2019 at Griffin Hospital, with his family by his side. Dietrich was born in Czechoslovakia on September 15, 1943 to the late Julius Neumahr and Emilie Wawrinsky. Dietrich was an avid photographer, enjoyed Formula 1 racing, and had a love of dogs so strong that he made a career of selling dogs to police departments throughout the Northeast. He took great pride in finding the perfect dog for each individual department or personal family need, and made sure that the fit was natural and would last a lifetime. He loved to take pictures of all things nature, cars, dogs, and his littlest grandchild Michael. You could always find Dieter (as his friends called him; Opa as his grandkids called him), with a German beer in his hand, camera over his shoulder, dog by his side, telling an inappropriate joke or a story about his life and times in Europe. He will be greatly missed by many. He is survived by his children, Michael Neumahr and his wife Jessica of Oxford; Liz Murrison and her husband Harry of Amelia, Ohio, and Caroline Rogers and her late husband Scott of Shelton. He is also survived by his three grandchildren, Lee, Hailey and Michael; his brother Peter Neumahr of Austria; long time friend Lynda Cherney of Shelton, and many close friends he made throughout his years of photography and canine sales. Family and friends are invited to celebrate his life at a memorial service on Saturday, January 4, 2020, 11:00am at Immanuel Lutheran Church, 25 Great Hill Rd., Oxford, CT.

Dietrich J. Neumahr, age 76, of Derby, passed away on Sunday, December 22, 2019 at Griffin Hospital, with his family by his side. Dietrich was born in Czechoslovakia on September 15, 1943 to the late Julius Neumahr and Emilie Wawrinsky. Dietrich... View Obituary & Service Information

The family of Dietrich J. Neumahr created this Life Tributes page to make it easy to share your memories.

Send flowers to the Neumahr family.