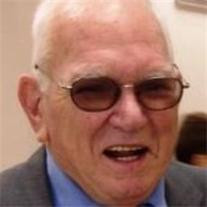 Daniel F. McPhee, age 81, of Oxford, the beloved husband of the late Carolyn Brown McPhee, entered into eternal rest on Friday, February 22, 2013 at Griffin Hospital. He was born in Rochester, NY on March 4, 1931, son of the late Walter and Louise McPhee Daniel was a devout communicant of The Church of the Good Shepherd of Seymour. He was a Mechanical Engineer for the Farrell Corp. for many years working at both their Rochester, NY and Ansonia facilities. Daniel proudly served his country as a member of the United States Army during the Korean Conflict. He was a volunteer for Griffin Hospital, was an avid member of the YMCA Silver Sneakers and loved woodworking, especially creating wooden model cars that he donated to different charities. Daniel will be sadly missed by his family and many friends. His loving family includes is two sons, David D. McPhee and his wife Darlene of Grand Island, Florida and Douglas E. McPhee and his wife Melanie of Slatersville, RI, his brother Raymond McPhee and with wife Betty, his sisters Lillian Grausnick and her husband Bob and Dorothy Kenny and her husband Tom, his grandson Jeremy McPhee, his great granddaughter Kailey McPhee and several nieces and nephews. Daniel was predeceased by his brothers Edward McPhee, Jack McPhee, Walter McPhee and Jerry McPhee and his sister Wilma Steffenhagen. A Funeral Service is Celebration of Daniel's life will be held on Thursday, February 28, 2013 at 10:00 am in the Chapel of the Miller-Ward Funeral Home, 260 Bank Street (RT 67, across from Klarides Village) Seymour with a Mass of Christian Burial to follow at 11:00 am at The Church of the Good Shepherd, 135 Mountain Road, Seymour. Interment in the family plot at Mountain Meadows Cemetery, Seymour, will be in the Spring. Friends and relatives may call at the funeral home on Thursday morning from 8:00 am until the start of the Funeral Service at 10:00 am. In lieu of flowers, memorial gifts may be made in Daniel's memory to The John E. Fogarty Center, 220 Woonasquatucket Ave, North Providence, RI 02911.

Daniel F. McPhee, age 81, of Oxford, the beloved husband of the late Carolyn Brown McPhee, entered into eternal rest on Friday, February 22, 2013 at Griffin Hospital. He was born in Rochester, NY on March 4, 1931, son of the late Walter and... View Obituary & Service Information

The family of Daniel McPhee created this Life Tributes page to make it easy to share your memories.

Send flowers to the McPhee family.