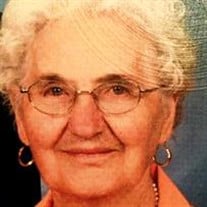 Czeslawa Wegiel (Babcia), age 87 of Seymour entered into eternal rest peacefully on Wednesday, December 14, 2016 at Bridgeport Hospital, after a long battle with Parkinson's disease. She was born in France on April 24, 1929, to the late Katarzyna Kurosz and Jan Sieczkowski. Later she lived in Poland. She loved to go to family gatherings and socialize while reminiscing about the old times. Czeslawa lived with her daughter and son-in-law for fourteen years. Her family extends their thankfulness to Dr. Jutkowitz and his staff for all the care given to her and also to the PCA and VNS. She will be sadly missed by all and will remain forever in our hearts. She was predeceased by her husband Stanislaw, a son Henryk and a daughter Zofia. She is survived by a sister Krystyna Jaje and sister-in-law Czeslawa Kaczor, two daughters Irena (Bogdan) Jaje and Helena (Stefan) Trzepacz, two sons John (Jadzia)Wegiel and Ted Wegiel, a daughter-in-law Marysia Wegiel, her grandchildren include Sylvia Jaje, Dominik and Daniel Trzepacz, Iwona and Maciek Rucki, Andy and Gosia Wegiel, Krysia and Jag Neelakandan, Ela and Darek Zdunek, Robert and Iwona Wegiel and her great-grandchildren Noah, Patricia, Angelica, Eliana and Alex. She was predeceased by her sisters Genowefa and Anna and her brothers Jozef and Wojciech. A Funeral Service in Celebration of Czeslawa’s Life will be held on Saturday, December 17, 2016 at 9:00 am in the Chapel of the Miller-Ward Funeral Home, 260 Bank Street (RT. 67, across from Klarides Village) Seymour with a Mass of Christian Burial to follow at 10:00 am at St. Michael Church, 75 Derby Ave, Derby. Interment will be in the family plot at Mount St. Peter Cemetery, Derby. Friends and family may call at the funeral home on Friday evening from 4:00 pm until 7:00 pm.

Czeslawa Wegiel (Babcia), age 87 of Seymour entered into eternal rest peacefully on Wednesday, December 14, 2016 at Bridgeport Hospital, after a long battle with Parkinson's disease. She was born in France on April 24, 1929, to the late Katarzyna... View Obituary & Service Information

The family of Czeslawa Wegiel created this Life Tributes page to make it easy to share your memories.

Send flowers to the Wegiel family.