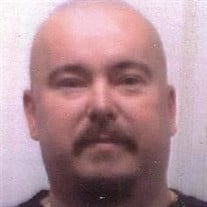 Christopher M. Ellingson, age 45, of Seymour, the beloved husband of Kim Ellingson, entered into eternal rest peacefully on Tuesday, March 3, 2015. He was born in Downers Grove, IL on May 10, 1969, the beloved son of Beatrice Sleezer Ellingson and the late Duane Ellingson. Chris was a graduate of Emmet O'Brien Technical School in Ansonia and proudly served his country as a member of the United States Navy. He was an Electrical Installer for Sikorsky Aircraft and a member of the David S. Miles Post 174 American Legion of Oxford. Chris loved to ride Harley Davidson motorcycles, fish, attend game dinners, the New England Patriots and spending time at the beach with his wife Kim. He would do anything for anyone and was a friend to all and everyone in need. Chris will be sadly missed by his family and many friends. His family in addition to his loving wife Kim includes his mother, Beatrice Sleezer Ellingson, his sister Stacey Ellingson, his brother Duane P. Ellingson, his brothers-in-law Tom Kelly and his wife Karen and Walter Kelly and his wife Maryann, his friends Russell Pawlak, Mike Bergesano and Richie MacEachern, his cats Bella and Buddy and several cousins. A Mass of Christian Burial will be held on Saturday, March 7, 2015 at 10:00 am at St. Michael Church, 25 Maple Ave., Beacon Falls. Everyone is invited to join the family at The Brookside Inn Restaurant, 231 Oxford Rd., Oxford, for a repast following the mass on Saturday. Friends and relatives may call on the family on Friday, March 6, 2015 from 4:00 pm until 7:00 pm at the Miller-Ward Funeral Home, 260 Bank Street (RT. 67, across from Klarides Village), Seymour. Memorial gifts in Chris's memory may be made to the American Diabetes Foundation, 2080 Silas Deane Highway, Rocky Hill, CT 06067

Christopher M. Ellingson, age 45, of Seymour, the beloved husband of Kim Ellingson, entered into eternal rest peacefully on Tuesday, March 3, 2015. He was born in Downers Grove, IL on May 10, 1969, the beloved son of Beatrice Sleezer Ellingson... View Obituary & Service Information

The family of Christopher M. Ellingson created this Life Tributes page to make it easy to share your memories.

Send flowers to the Ellingson family.