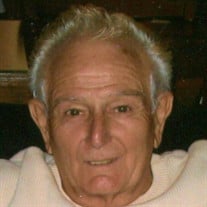 Charles (Sharkey) James Visocchi, age 89 of Seymour, the beloved husband of Rachel (Lambert) Visocchi , peacefully entered into eternal rest on Sunday, January 30, 2022 at his residence surrounded by his loving family. Sharkey was born in Sudbury, Mass., on September 17, 1932, the beloved son of the late Carmen C. and Vincenza ( Direzzo) Visocchi. Sharkey was a devout communicant of St. Nicholas Parish-Church of the Good Shepherd and was a member of its Men's Club. He was past Grand Knight of Aurora Council #53 of Seymour and was a 4th Degree member of the Knights of Columbus. Sharkey was a retired Flight Inspector for Sikorsky Aircraft , Stratford where he worked for 36 years and had worked on the Presidential Helicopter. He proudly served in the U.S. Airforce during the Korean Conflict and was stationed in Germany. For many years, Sharkey worked for Grassy Hill Country Club of Orange. He was an avid golfer, enjoyed playing racquetball, fishing and boating on the Housatonic River. He also enjoyed being with his family and friends. Sharkey will be sadly missed by all and will always remain forever in our hearts. In addition to his beloved wife Rachel , Sharkey is survived by his beloved son Kevin C. Visocchi (Barbara) of Milford, two loving daughters Romaine Visocchi of Southbury and Lisa Hixson (Russell) of Phoenix, Az., two caring sisters Rose Sweeney of Dracut, Ma., and Sylvia Allard (Richard) of Fl., six cherished grandchildren Jacob, Jaime, Julien, Josh, Angela and Manny, three cherished great-grandchildren Anisia, Eric and Keith , as well as several nieces and nephews. He was predeceased by two loving brothers Augusto and Joseph Visocchi, two loving sisters Jenny Rivanis and Carol Visocchi. A Mass of Christian Burial will be held on Thursday, February 3, 2022 at 10:00 am (Directly) at St. Nicholas Parish-Church of the Good Shepherd, 135 Mountain Rd., Seymour. Interment with full honors will be at State of Connecticut Veterans' Cemetery, 317 Bow Lane, Middletown at 1:00 pm. In lieu of flowers memorial donations in Sharkey's memory may be made to St. Joseph's Indian School of South Dakota, through the funeral home.

The family of Charles (Sharkey) Visocchi created this Life Tributes page to make it easy to share your memories.

Send flowers to the Visocchi family.