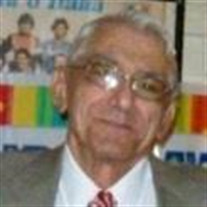 Mr. Charles J. Shaboo, 84, formerly of Danbury, died suddenly February 11th in Bethany, CT.Mr. Shaboo was born March 18th, 1931, in Lawrence, MA., son of George and Bertha Shaboo of Tamarac, FL., formerly of Danbury, CT. He was a 1950 graduate of Danbury High School and Graduated from Quinnipiac University in 1960 Hamden, CT. He was a Veteran of the Korean War. Charles owned Amity Sandblasting then the company became Chuck Shaboo LLC Cemetery Lettering out of Bethany, where he engraved the monuments of those that passed on. Many knew him by his four door yellow pick up truck seen from New York to Connecticut, blasting the lettering onto the stones of others. His work and expertize will be missed by those that knew him. The man that etched in stone gave families a final marker and Charles left a mark far and wide over his 40+ yrs of sandblasting. Besides his wife Barbara Swain-Shaboo; he leaves his three daughters, Kim Shaboo-Birge, Cindy Shaboo-Williams and Connie Shaboo, all formerly of Bethany; two step sons, Adam and Todd Swain; two sisters, Gloria Tomey and Sarah Shea; two brothers George and Edward; four grandchildren, Blaec and Selena Birge, Robert and Christina Anastasio; two great grandsons, Nile Parker and Ethan Buker. A Funeral Service in Celebration of Charles's life will be held on Thursday, February 18, 2016 at 10:00 am in the Chapel of The Miller-Ward Funeral Home, 260 Bank Street, ( Rte. 67 across from Klarides Village), Seymour, CT with Reverend Kevin Forsyth, Pastor of St. Augustine Church officiating. Interment with full military honors in the family plot will follow in St. Peter's Cemetery, Danbury. Friends and relatives may call at the funeral home on Wednesday, February 17. 2016 from 4:00 pm to 7:00 pm. Memorial Contributions may be made in Charles' memory to the Wounded Warrior Project P.O. Box 758518 , Topeka, K.S. 66675, www.woundedwarriorproject.org/ Telephone: 855-348-4997.

The family of Charles J. Shaboo created this Life Tributes page to make it easy to share your memories.

Send flowers to the Shaboo family.