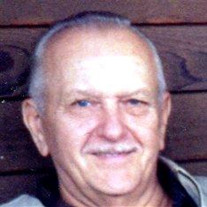 Charles H. Griffing, Jr., age 90, of Oxford, the beloved husband of 60 years to Regina Ann Griffing, entered into eternal rest peacefully, surrounded by his loving family on Sunday, January 17, 2016 at Griffin Hospital, Derby. He was born in Danbury on September 25, 1925, son of the late Charles and Anna Griffing. Charles was a communicant of the Church of the Good Shepherd of Seymour and a graduate of the University of Bridgeport with a degree in Engineering. He worked as an Industrial Engineer for Norden Systems prior to his retirement. Charles proudly served his country as a member of the Army Air Force, flying 35 combat missions during World War II as a Tail Gunner on a B17. He enjoyed traveling with his wife to many places including Alaska, Europe, Yugoslavia and the Holy Land. Charles enjoyed his times of peace and quiet, especially when he was gardening and camping. Most of all, he enjoyed spending time with his family and friends. Charles will be sadly missed by all and will remain forever in our hearts. His family in addition to his wife Regina includes his five loving sons Charles H. Griffing, III and his wife Carolyn of Seymour, August Michael Griffing of Oxford, Patrick J. Griffing and his wife Debra of North Branford, Thomas E. Griffing and his wife Johanna of Wallingford and Joseph L. Griffing of Meriden, his two caring daughters Kathleen D'Emanuele and her husband Nick of Bristol and Susan Griffing of Derby, and his 14 grandchildren and 6 great grandchildren. Special thanks to his devoted caregivers Liz O’Rourke and Marjory Leone A Mass of Christian Burial in Celebration of Charles's Life will be held on Friday, January 22 at 10:00 am at The Church of the Good Shepherd, 135 Mountain Road, Seymour. Interment will follow in the family plot at Mountain Meadows Cemetery, Seymour. Friends and relatives may call at the Miller-Ward Funeral Home, 260 Bank Street, (RT 67, across from Klarides Village) Seymour on Thursday evening, January 21, from 4:00 pm until 7:00 pm. In lieu of flowers, memorial contributions may be made in Charles's memory to the Church of the Good Shepherd Improvement Fund, 135Mountain Road, Seymour, CT 06483.

The family of Charles H. Griffing Jr. created this Life Tributes page to make it easy to share your memories.

Send flowers to the Griffing family.