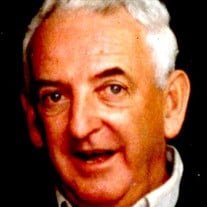 Charles T. Anderson, Sr., age 81, of Oxford, the beloved husband of 59 years to Mary Laird Anderson, entered into eternal rest peacefully on Wednesday, March 18, 2015 at Bridgeport Hospital, surrounded by his loving family. He was born in Trumbull on March 22, 1933 beloved son of the late Harry J. and Helen Gannon Anderson. Charles was a devout communicant of St. Thomas the Apostle Church of Oxford. He was a retired truck driver of O&G Industries and formerly worked for Silliman Construction Company, Hi-Ho Petroleum Heating Oil Company and Valley Transportation. Charles proudly served his nation as a member of the United States Army with the rank of Corporal during the Korean War. He moved to Oxford from Bridgeport 53 years ago. He was a 40 year member of the Teamsters Union Local 191 of Bridgeport and was an active member of the David S. Miles Post 174 American Legion of Oxford. Charles was a member and founder of the Oxford horseshoe league and was a former member of the Shelton horseshoe league as well. He was an avid wood splitter who enjoyed feeding his birds. Charles enjoyed spending time with his family and friends and especially cherished his time with his grandchildren and his great grandson. He will be sadly missed by all. Charles's loving family in addition to his wife Mary includes his three sons Charles T. Anderson, Jr. and his wife Debra of Oxford, Wayne S. Anderson and his wife Judy of West Haven and James S. Anderson of Derby, his daughter Brenda Lee DiGiovanni and her husband Ernest of Waterbury, his sister Barbara Bourque of Stratford, his four cherished grandchildren Nina C. Kekacs and her husband Ryan, James C. Anderson, Austin W. Anderson and Spencer C. Anderson, his cherished great grandson Ryder J. Kekacs and several nieces and nephews. He was predeceased by his beloved son Kenneth J. Anderson, his brother Warren Anderson and his two sisters Shirley Newton and Jeanne Bourque. A Funeral Service in Celebration of Charles's life will be held on Monday, March 23, 2015 at 9:00 am in the chapel of the Miller-Ward Funeral Home, 260 Bank St (RT 67, across from Klarides Village) Seymour with a Mass of Christian Burial to follow at 10:00 am at St. Thomas the Apostle Church, 733 Oxford Rd, Oxford. Following the Mass, Full Military Honors will be accorded. Interment will be in the Spring at the family plot at Riverside Cemetery, Oxford. Friends and relatives may call at the funeral home on Sunday from 3:00 pm until 6:00 pm. Memorial gifts in Charles's memory may be made to the Make a Wish Foundation or the David S. Miles Post 174 American Legion of Oxford through the funeral home. To light a virtual candle and leave online condolences please visit www.millerwardfuneralhome.com

The family of Charles T. Anderson Sr. created this Life Tributes page to make it easy to share your memories.

Send flowers to the Anderson family.