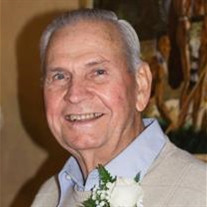 Casimir Joseph Grusz, age 87, of Seymour, entered into eternal rest peacefully on Sunday, June 18, 2017 at his home in Seymour. He was born in Pine Island, NY on December 23, 1929 to the late Peter and Josephine Kalbarczyk Grusz. Casimir grew up farming on the family’s dairy and vegetable farm before leaving to serve in the Army in the Korean War. After returning home from service to settle with family in Seymour, he later began working for his brother-in-law’s cab company where he soon met his late wife Eva Huzar Grusz and the couple remained lovingly inseparable for over sixty years. Casimir loved making pancakes and eggs on weekends, and enjoyed his puzzles in the newspaper with his morning coffee. He was a devoted fan of his children’s and grandchildren’s sports going to each and every event. His sport was golf; he practiced putting in the basement every morning, enjoyed playing golf with his son and son-in-laws, and he always made it to his Thursday golf league. His voice was gentle and he was kind. He was a man who was always generous and put others in need before him. He lent a helping hand, whether it be fixing a leaky faucet or brakes on a car. Casimir’s loving family includes his two daughters Debra and Robert Morrow, and Lori and Mathew Tilton, all of Seymour; and one son David and Pamela Grusz of Dayton, Ohio. Eight grandchildren: Jason Weaving, Amanda Grusz, Tonya (Alex) LaPre, Alisha (Dana) York, Mitchell Grusz, Samantha Tilton, Joshua Tilton, and Cassie Tilton. Two great-grandchildren: Casimir York and Evie Ann York. One brother Walter (Irene) Grusz of Seymour, one sister-in-law Sophie Zibluk of Southbury, one brother-in-law Alex Zibluk of Oxford and many nieces and nephews. Casimir was predeceased by his sisters Josephine Grusz Bigert, Stasia Grusz Supranovich, Bertha Grusz Kudasik, Anna Grusz Haversat, Jennie Grusz, Eleanor Grusz Wasko, Florence Grusz Magaldi, and his brothers Frank Grusz, Henry Grusz, Edward Grusz, Peter Grusz, Jr., Mitchell Grusz, and Joseph Grusz. A Funeral Service in Celebration of Casimir’s Life will be held on Friday, June 23, 2017 at 9:00 am in the Chapel of the Miller-Ward Funeral Home, 260 Bank Street (RT. 67, across from Klarides Village) Seymour with a Mass of Christian Burial to follow at 10:00 am at St. Peter & St. Paul Ukrainian Greek Catholic Church, 105 Clifton Avenue, Ansonia. Interment will follow in Pine Grove Cemetery, Ansonia (with full military honors). Family and friends may call on Thursday, June 22, 2017 from 4:00 to 8:00 pm. A Panikhida Service will be held at the funeral home at 7:00pm. Memorial Gifts in memory of Casimir may be made to St. Peter & St. Paul Ukrainian Greek Catholic Church Preservation Fund, through the funeral home.

Casimir Joseph Grusz, age 87, of Seymour, entered into eternal rest peacefully on Sunday, June 18, 2017 at his home in Seymour. He was born in Pine Island, NY on December 23, 1929 to the late Peter and Josephine Kalbarczyk Grusz. Casimir... View Obituary & Service Information

The family of Casimir Joseph Grusz created this Life Tributes page to make it easy to share your memories.

Send flowers to the Grusz family.