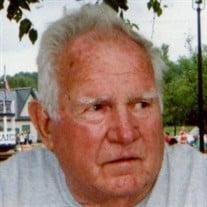 Carl (Dapper) Dahn, age 85, of Seymour, son of the late Carl and Martha Dahlman Dahn passed away on Saturday, December 31, 2016 at Yale New Haven Hospital with his loving family by his side. Carl was the husband of Betty (Fetyko) Dahn for more than 59 years. Carl was a lifelong resident of Seymour and a graduate of Seymour High School Class of 1950 where he was an honored member and Co-Captain of the football and baseball teams. He was a U.S. Marine who served during the Korean War and saw two major battles. Carl was employed as a Lineman Chief for 38 years by UI after his service until his retirement in 1994. He was a devout communicant of the Church of the Good Shepherd of Seymour. Carl loved being outdoors and enjoyed going to his cabin in Sangerville, Maine. He loved being with his family and many friends and will be sadly missed by all but will remain forever in our hearts. Carl is survived by his wife Betty of Seymour, his children Carl Dahn and his wife Joann of Florida, Lisa Matejek and her husband Don of Beacon Falls, Kit Aleksiewicz and her husband Robert of Prospect, Joseph Dahn and his wife Karrie of Seymour and Lance Dahn of Seymour, his sister Barbara Woodward of Bethany, his brothers Tommy Dahn of Florida and Richard Dahn of Meriden, his grandchildren Stephan Dahn of Woodbury, Nathan Dahn of Florida, Carl Dahn of Florida, Lori Aleksiewicz of Thomaston, Matt Matejek of Waterbury, Joseph Aleksiewicz of Torrington, Taya Matejek of Beacon Falls, Jessica Dahn of Florida, Leanna Dahn of Seymour, Scott Dahn of Florida, his great grandchildren Samantha Dahn and Jesse Dahn of Woodbury, Carl Dahn of Florida, Brady Dahn of Florida, his great great granddaughter Olivia Dahn of Woodbury and several nieces and nephews. Carl was predeceased by his foster son Gordon Richmond, his sisters Carol Weinberg and Betty Turner and brothers Leslie Dahn, Kenneth Dahn and William Dahn. A Mass of Christian Burial in Celebration of Carl's Life will be held on Thursday, January 5, 2017 at 10:00 am DIRECTLY at the Church of the Good Shepherd, 135 Mountain Road, Seymour. Burial, with full military honors accorded will follow in the family plot at Jack's Hill Cemetery in Oxford. Friends and relatives may call at the Miller-Ward Funeral Home, 260 Bank Street (RT. 67, across from Klarides Village) Seymour on Wednesday, January 4, 2017 from 4:00 pm until 8:00 pm. Memorial Gifts in Carl's memory may be made to Asian Faith Mission, ICO Living Spring Christian Fellowship, 141 Great Hill Rd., P.O. Box 440, Seymour,CT 06483.

Carl (Dapper) Dahn, age 85, of Seymour, son of the late Carl and Martha Dahlman Dahn passed away on Saturday, December 31, 2016 at Yale New Haven Hospital with his loving family by his side. Carl was the husband of Betty (Fetyko) Dahn for more... View Obituary & Service Information

The family of Carl Otto Dahn created this Life Tributes page to make it easy to share your memories.

Send flowers to the Dahn family.