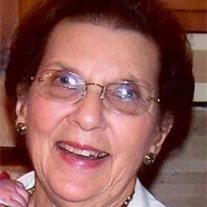 Audrey Ewing Weise, age 88, of Oxford, formerly of Trumbull, beloved wife of the late Dr. Ellwood Weise Jr., entered into rest on Monday, October 15, 2012 at Griffin Hospital. She was born in Philadelphia, Pa., on January 28, 1924, the daughter of the late Samuel and Hannah Ewing. Audrey took great pride in her family and home; gardening brought her much joy in her later years. She was also an avid reader and sports enthusiast. For many years, she and her late husband Woody raised show dogs. She was a resident of Oxford for the past eight years. Her loving family includes her son Kenneth Weise and his wife Jill of Birdsboro,Pa;, two daughters: Wendy Rohwedder and her husband Dr. Frederick/Bud of Oxford, and Heidi Weise of West Haven; six grandchildren: Scott Rohwedder and his wife Jennifer of Southbury, Brooke Boutilier and her husband Jeffrey of New York City, Gavin and Ian Weise of Washington D. C. , Colin Weise and his wife Crystal of Pottstown, Pa., and Tyson Weise and his wife Alexis of Spring City, Pa., and six great-grandchildren. Services and Interment will be private at the convenience of the family. There will be no calling hours. In lieu of flowers memorial donations may be made in Audrey's memory to ECAD- Educated Canines Assisting with Disabilities, P.O. Box 251, Dobbs Ferry, NY 10522 or online @ http://www.ecad1.org. ECAD is an organization that breeds and trains Assistance Dogs for clients with a wide variety of disabilities and needs. Arrangements have been entrusted to the Miller-Ward Funeral Home, 260 Bank Street, Rte. 67, Seymour, Ct.

The family of Audrey Weise created this Life Tributes page to make it easy to share your memories.

Send flowers to the Weise family.