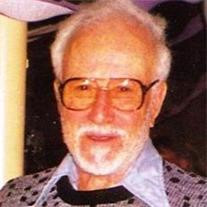 Albert Luigi Arcuri, age 90, of Oxford, the beloved husband of 59 years of Hortense Matos Arcuri, entered into rest unexpectedly at his home in Oxford on Friday, September 3, 2010. He was born in Calabria, Italy on August 9, 1920, son of the late Anthony and Josephine Tucci Arcuri. Albert was the founder of the Arcuri Electric Company of Oxford. He was a United States Army Air Corps veteran of World War II, seeing action in the Philippines. During his time in the military, Albert was wrestler. A longtime member of the David S. Miles Post 174 American Legion of Oxford, he also loved building homes, gardening and had a good sense of humor. Albert was a former Constable for the Town of Oxford. He and his wife Hortense also operated the Oxford Post Office for 8 years. Albert was also a member of the Swan Lake Association. He will be sadly missed by his family and many friends. His loving family in addition to his wife Hortense includes his caring son Albert A. Arcuri and his wife Lorrie of Oxford, his loving daughter Cynthia Urless and her husband Theodore of Ansonia, his devoted sister Eleanor Tucci of New Jersey, his two cherished granddaughters, Shannon Urless of Oxford and Lisa Urless of Hamden, his loving nieces, nephews, great nieces and great nephews. He was predeceased by his beloved brother Gabriel Arcuri and his cherished sisters Gilda Arcuri and Rose Martino. A Prayer Service in Celebration of Albert’s life will be offered on Thursday, September 9, 2010 at 10:00 in the Chapel of the Miller-Ward Funeral Home, 260 Bank Street (RT. 67, across from Klarides Village) Seymour with the Rev Leonard Kvedas, officiating. Interment in the family plot at St. Augustine Cemetery, Seymour, with full military honors being accorded. Friends and family may call at the funeral home on Wednesday, September 8, 2010 from 4:00 pm to 7:00 pm. The David S. Miles Post 174 American Legion will have a service at 6:00 pm to honor Albert. Expressions of sympathy in Albert’s memory may be made to David S. Miles Post 174 American Legion, 43 Oxford Road, Oxford, CT 06478.

Albert Luigi Arcuri, age 90, of Oxford, the beloved husband of 59 years of Hortense Matos Arcuri, entered into rest unexpectedly at his home in Oxford on Friday, September 3, 2010. He was born in Calabria, Italy on August 9, 1920, son of the... View Obituary & Service Information

The family of Albert Arcuri created this Life Tributes page to make it easy to share your memories.

Albert Luigi Arcuri, age 90, of Oxford, the beloved husband of...

Send flowers to the Arcuri family.